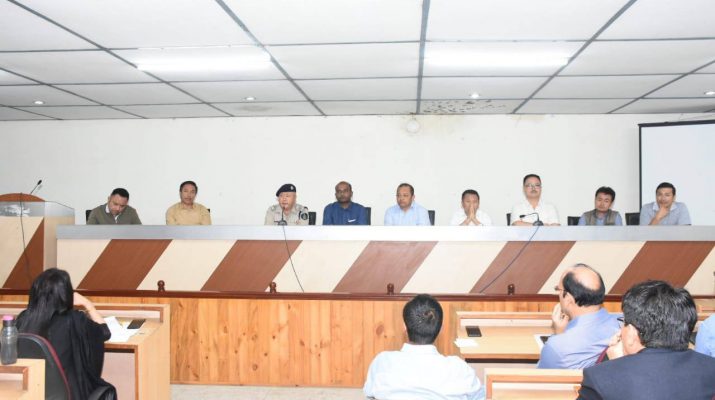 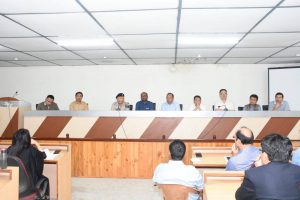 Namchi, 24 July (IPR): District Collector, South, Shri Ragul K., conducted a meeting with all the departmental heads to discuss and deliberate on the status of the ongoing schemes and programmes at the conference hall of DAC today.

The agenda of the meeting was to draw up an action plan for the future programmes and policies of the State and Central Government. The meeting was attended by ADC (South), Shri Satyan K. Pradhan, ADC (Development, Rabongla), SDMs, heads of departments and representatives from line departments.

Addressing the gathering, the DC directed Block Development Officers to hold a comprehensive credit committee meetings on a quarterly basis. This meeting should be arranged at all blocks involving concerned departments including lead bank in order to facilitate with subsidies and other benefits to the genuine beneficiaries, he added.

Shri Ragul also enquired about the status of Fasal Bima Yojana and PM-KISAN Yojana for the interest of the progressive farmers. He also informed that a District Level Commitee for screening of One Family One Job has been formed, thus respective BDOs has been assigned for document verification of OFOJ accordingly.

Likewise, due to the current torrential downpour, South district has witnessed several landslides and with regard to this, the DC updated that thorough checking and solution will be deliberated upon at the earliest. He also said that it is impertinent for the officials to regulate meat stalls and slaughter houses.

Shri Ragul also asked the RMD, HRD and other concerned departments to organize awareness programmes in schools on scholarship programmes and Jal Shakti Abhiyan. He also stressed on the necessary clearance for dumping locations site which is to be carried out in accordance with line departments. He also conveyed the attendees about the restart of Each Friday Field Day which will commence from DAC South next month for effective delivery of welfare measures at the grassroot level.

He also reiterated proper coordination and cooperation from all line departments concerning the execution and timely completion of various schemes of the State Government.

Superintendent of Police, South, Shri Prawin Gurung, also apprised the gathering to use the State Disaster Relief Force located at Pipalay for South and West districts for mitigation of any future disasters. He also elucidated that the South Police department and other line departments in a synchronized manner will check the movement of heavy vehicles at entry point in Melli.

The meeting also touched upon the conditions and status of Smart City Project, Namchi.

During the course of the meeting, a District level Committee for sexual harassment was also reconstituted.

Notice on the containment of the following areas under South District