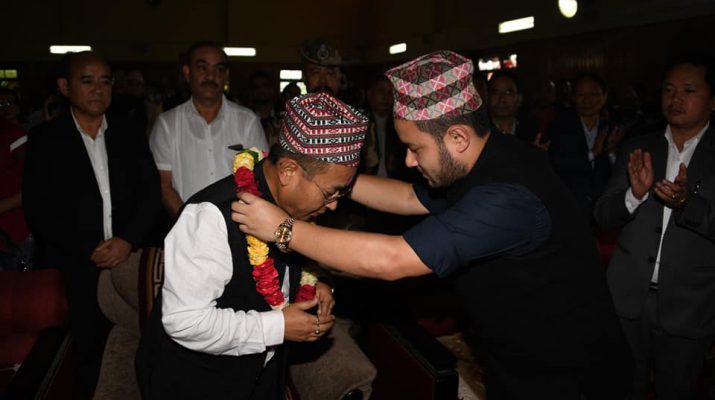 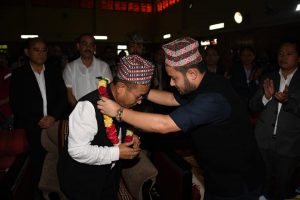 Soreng, 13th July, 2019 (IPR): Hon’ble Chief Minister of Sikkim Shri. P. S. Tamang (Golay) attended as the Chief Guest for the 205th Birth Anniversary of Bhanu Bhakta Acharya celebrated at the Auditorium Hall, Soreng Sr. Sec. School, West Sikkim. The HCM was accompanied by Guest of Honor Shri. Aditya Golay, MLA Soreng along with Shri. P. T. Luksom, Former Deputy Chief Minister of Sikkim; Shri. Jacob Khaling, Hon’ble Political Secretary to HCM; Shri. CP Sharma Hon’ble Advisor to HCM (Press and Media); Shri. M. P. Subba, Hon’ble Administrative Advisor to HCM; Shri. S. D. Dhakal, Secretary to HCM; Shri. Pratap Pradhan, Secretary (Protocol, Home Department); Shri. Gayas Pega, ADC (Dev.) Soreng; Shri. Himmat Rai, SDM Soreng; Asst. Prof. Balaram Pandey (Sikkim University) as resource person for the program and other dignitaries.
HCM in his address to the gathering, congratulated the organizing committee for making the Birth Anniversary of Bhanu Bhakta Acharya a grand success. He acknowledged the eminent person for his contribution and for his dedication towards the Nepali Language. He then talked exclusively on the importance of language and its use, he urged the students to give priority to their native language and to be able to be skillful in the language. He also expressed his concern for the young generation not taking so much interest in the native languages which needs to improve. He gave examples of how other nations give preferences to their own languages above all else hence he also urged them to be proficient in their own languages which is only possible if they have love for them. He further congratulated the toppers of Nepali Language in the Soreng Chakung Constituency and encouraged them to do well.
He then encouraged the audience especially the school students to not lose hope based on their present circumstances but their sole determination can make them who they want to be in their future. He mentioned that circumstances shouldn’t govern their dreams nor should financial situations be a hindrance for their future goals but no matter what circumstances come in life one has to have the courage to push through and achieve success. HCM, who is an alumni of the Soreng Senior Secondary School gave a retrospective view of his earlier days in the School as a student and as a teacher and how the struggles during his school days along with hard circumstances paved way for the person he is. He urged them (students) to strive towards their goals no matter what situations may come and then success will be made available to them in due time. He then urged the students to have a positive mind set and learn from their struggles.
During the program, the HCM was felicitated by the Soreng Bhanu Jayanti Celebration Committee along with Shri. S. D. Dhakal, Bal Sahitya Awardee by Sahitya Akademi for his literary contributions and Shri. Pratap Pradhan were also felicitated during the program.
Felicitation to highest marks scorer in Nepali subject under Soreng-Chakung Constituency was also done namely Master Pramod Gurung (Class 12) from Chakung Senior Secondary School; Miss Misang Dolma Tamang (Class 12) from Soreng Senior Secondary School and Miss Mandira Rawat (Class 10) from Soreng Senior Secondary School.

The Birth Anniversary of Bhanu Bhakta Acharya began with the Lightning of lamp and offering khada at Bhanu Salig, Community Hall Soreng followed by the Peace procession (from Bhanu Uddhan to Soreng Sr. Sec. School) followed by the Lightning of lamp and offering of Khada to the portrait of Bhanu Bhakta by the Chief Minister and MLA Soreng Shri. Aditya Golay.
Later, the lifestyle, work and literature of Acharya Bhanu Bhakta was also presented by Asst. Prof. Balaram Pandey, Ramayana Path, Poem Recitation, Music and Cultural program by the School.
Lastly, souvenirs was also given to various personalities by the HCM on behalf of the organizing committee along with Prize Distribution was also conducted. 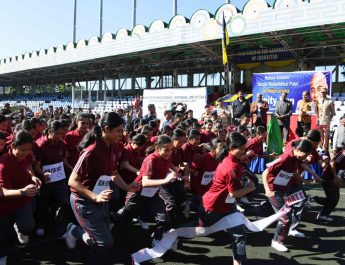 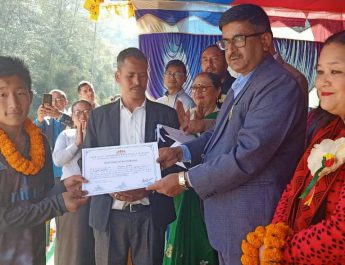