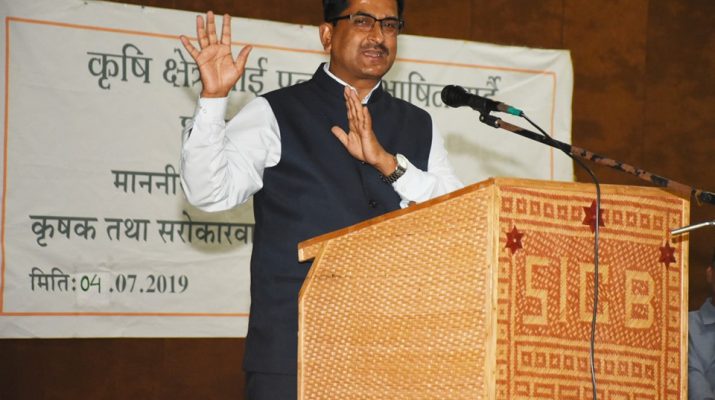 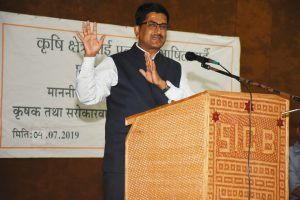 Hon’ble Minister FS&ADD, H&CCDD, AHLF & VS, IPR & Printing Department Mr. L. N. Sharma addressed the gathering present paid his due respect towards the farming community and credited them for the relentless efforts of helping meet the ever growing food demands of the public. He discussed the dire need of mobilizing a robust mechanism to deliver instantaneous benefits to the farmers of the State wherein he brought his focus upon the need for coordination and cooperation between the public and the administration. He strongly urged the farming community of Zoom Salghari Constituency to boost their farming techniques in order to strengthen the export market of Sikkim produce. Further, the Minister assured all help required to the public in order to augment and enhance their production thereby making them self-reliant and self-sufficient.

Addressing the program Secretary (Agriculture) Mr. Khorlo Bhutia spoke about how Agriculture is the most important sector of Indian Economy. He spoke about the benefits of farming to farmers who practice sustainable agriculture. He emphasized the advent of Green Economy which he defined as the economy that aims at reducing environmental risks and ecological scarcities, and that aims for sustainable development without degrading the environment. Thus, he stressed upon how the stakeholders should endeavor to work towards achieving the missions of Green Economy. Further, he also informed the gathering about Government of Sikkim’s initiatives to generate more livelihood opportunities in the state and strengthening the production economy of the state by 2022. He also spoke about schemes such as National Food Security Mission (NFSM), Pradhan Mantri Fasal Bima Yojana and Pradhan Mantri Kisan Pension Yojana.

Secretary (Horticulture) Mr. D. K. Bhandari also addressed the gathering about schemes related to Horticulture Department. He spoke largely about the various categories of subsidies that can be availed by the farmers through the Department. Similarly, CEO (Green Economy) Dr. S. Anbalagan and MD Sikkim Milk Union Dr. A.B.Karki also took to the stage to talk about Mission Organic Value Chain Development (MOVCD) which aims towards development of certified organic production in a value chain mode to link growers with consumers and to support the development of entire value chain and the role of cooperative societies towards rural development of Sikkim as a whole.

Other resource persons on the occasion were Director (Diary) Dr. B.M. Chettri, Director (Poultry) Mr. D.K.Pradhan who updated the farmers about Diary development, DDS Scheme, Kisan Credit Card Movement, SSDD Board roles and responsibilities, extension and training imparted at GPU and Panchayat level and so on.

During the course of the day tokens of various schemes under Horticulture department was distributed to the beneficiary through the hands of the Minister.

Later, the Minister also visited the manufacturing unit of Mother Diary Farm under Sikkim Milk Union and milch cow shed in the premises of Karfectar farm wherein he took stock of all the activities undertaken in the unit. 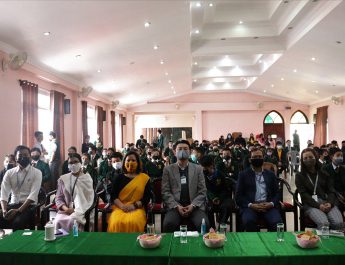