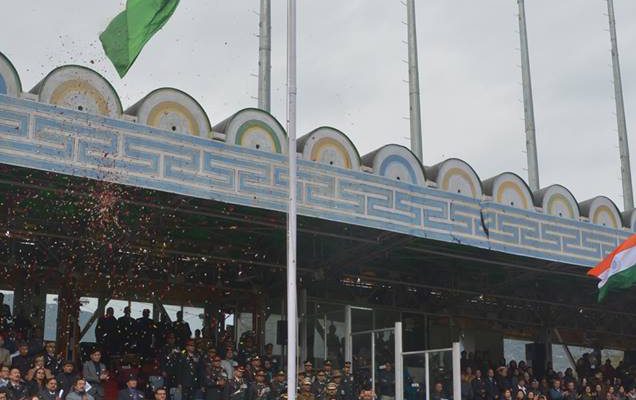 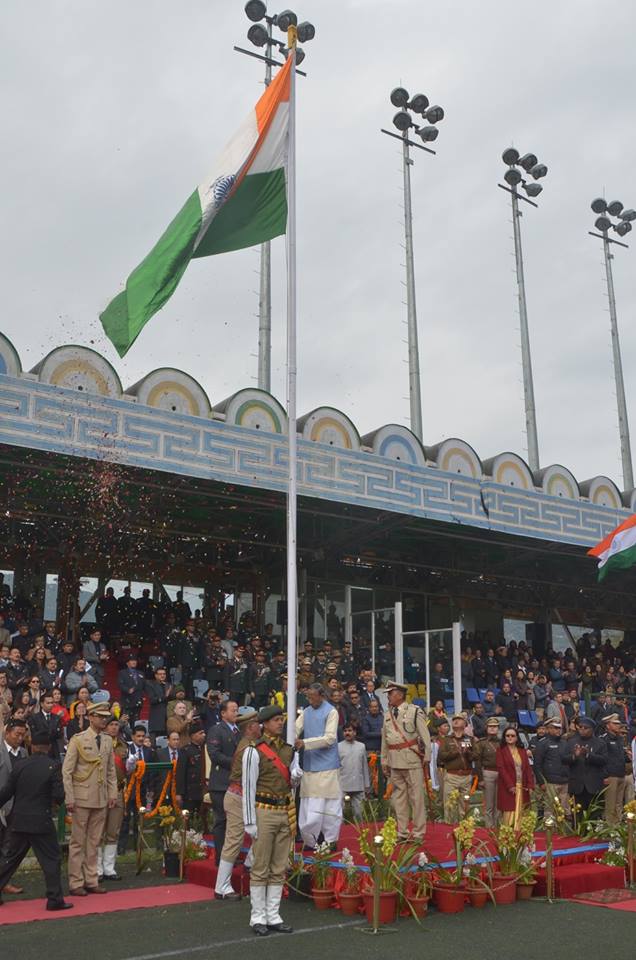 Gangtok, Jan 26: (IPR) The 70th Republic Day was celebrated at Paljor Stadium today. The Chief Guest of the day was the Hon’ble Governor, Shri Ganga Prasad and the Hon’ble Chief Minister, Shri Pawan Chamling was the Guest of Honour. Hon’ble Speaker (SLA), Shri K.N Rai, Chief Secretary, Shri A.K Srivastava, Heads of the Departments, officials, students and the public were present at the function.

In his address, the Governor expressed his happiness and satisfaction over the development of the State, which he said is a result of efficient and effective implementation of schemes. He spoke on the history and the significance of the Constitution and said that we should be proud of our roots, stating that the Constitution is a symbol of pride for all Indians.

He highlighted the successful implementation of Organic Farming in Sikkim and said that Sikkim was a model State for others to follow. From progress in the education sector to rural development, he also stated that the goal of the Government was to provide electricity to every household through the Deendayal Upadhyay Grameen Jyoti Yojana and Integrated Power Development Scheme. He threw light on the importance of road connectivity and all forms of transport, stating that a comprehensive road network in the entire State to connect with the most remote villages would be implemented.

He congratulated all those who have excelled in their respective fields, the State Awardees, recipients of Letters of Appreciation and ended his note encouraging everyone to unite and become a strong State so that progress and development takes place through the people and for the people.

The recipient of the State Meritorious Service Award 2019 were as follows:

The much-prized photograph of the Royal Bengal Tiger shot in the forest of Pangolakha Wildlife Sanctuary was then released on the occasion by the Governor.

For their praise worthy service and contribution to the society, taxi drivers from the State were acknowledged and awarded with Certificates of Appreciation. Their names are as follows:

1. Smt. Dawa Phuti Bhutia (Lepcha), who hails from Pangthang Kyongsa East Sikkim and is the first woman taxi driver in the State

3. Shri Deo Kumar Sharma, of Ghurpisey Namchi South Sikkim, who has been rewarded as ‘Best Driver’ in the past

The Hon’ble Governor also released several books published recently by the Department of Information & Public Relations. The Books were as follows:

· Sikkim: Now and Then

· Organic Farming in Sikkim As a Strategy for Sustaining Ecosystem Services and Livelihood by Dr. Eklabya Sharma

· Over To You: Inspirational and Challenging Quotes from Chief Minister Pawan Chamling for Students.

· Pawan Chamling: Leader with a Difference

· Pawan Chamling: The Most Secular Leader of India

· Awards and Recognitions: A Testament to Pawan Chamling’s Golden Era of Good Governance

· Secular Sikkim: Harmony at its Best

The Governor also released nineteen number of documentary video films produced by the Information & Public Relations Department that highlight the achievement of the State Government in various sectors. The documentary videos covered the following topics/Departments:

· Awards received by the Chief Minister

The Governor also launched SWACHH CAR BINS to be distributed to local taxis – an initiative of the Marwari Yuva Manch, Prerna Branch, Gangtok. Established two years back with 36 members, Prerna Branch is an all-women organization of Marwari Yuva Manch in Gangtok, which works for the betterment of society through social projects.

He also launched Packaged Large Cardamom by Olivet, a young Start-up from Sikkim.

The Chief Guest and the Guest of Honour visited the Army Equipment Display at the venue along with the other dignitaries.

The Governor presented trophies to three parade contingents for their performance. The Parade result were as follows:

Earlier, the venue erupted in joy and pride as the news of Ms. Draupadi Ghimirey, a well-known social worker from Sikkim and the founder of Sikkim Viklang Sahayata Samiti being awarded the Padma Shri Award 2019 was announced. The news was received from New Delhi on 25th of January. Ms Draupadi Ghimirey is known for her service towards the welfare of people with disabilities.

Due to continuous and incessant rain since couple of days in North Sikkim, it has triggered landslides at many parts of the district which has caused inconvenience to the tourist and local public of the district 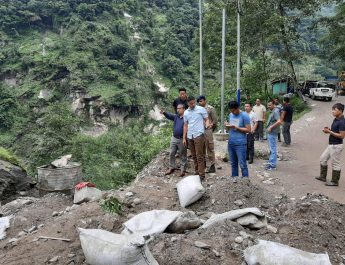 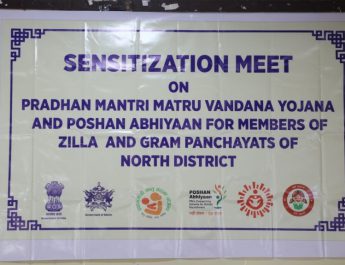