Mangan , 29th December (IPR): A valedictory programme for the special coaching for HCM Merit Scholarship Test 2019 was held today at Singhik Secondary School. The programme was graced by Honourable Minister, FEWMD, Shri Tshering Wangdi Lepcha, District Collector North, Shri Karma R Bonpo, Director HRDD, Shri Sonam Lepcha, Joint Director HRDD north, officers of HRDD and parents of the students.
The HRDD Department, North Sikkim conducted a special coaching programme for thirty eight meritorious students in the district at Singhik Secondary School. The free coaching camp was held by five dedicated teachers from various school in the district. The entire coaching programme was funded by Teesta Urja Power Project and free residential and fooding facilities were provided.
Speaking on the occasion, the Honourable Minister stated that the Honourable Chief Minister has started the Merit Scholarship programme for the poor students of the state. It was the vision of the HCM to provide equal opportunities to the poor students in receiving quality education so that they are competitive. He stated that Singhik Secondary School has the best infrastructure and it was a joint effort of all to develop the school. He stated that his government will further develop the school into a center of excellence in the near future.
The Director, HRDD Shri Sonam Lepcha stated that special coaching camp was started in 2010 and the current camp was the longest one. He stated that the Hon ble Forest Minister ,District Collector North, Teesta Urja Power Project and HRDD Department played a key role in successfully organizing the same. Currently about 114 students of the district have availed the scholarship and he was hopeful that more such students will avail in the near future. He also congratulated the teachers for take up the responsibility and challenge in coaching the students.
The District Collector North, Shri Karma R Bonpo said that North District has a very low birth rate and only about 500 births are taking place. Therefore it is important to provide all the children in the district with quality education and converse the precious human capital. It is now a endeavour of the district to develop centre of excellence for education in various school and ensure quality education is imparted. The District Administration is fully committed to achieving this goal and ensure that valuable human capital is developed well for the bright future of the district.
The Students attending the coaching camp expressed their thankfulness to the HRDD Department for providing the opportunity and stated that the experience gave them the confidence to do well in the near future. 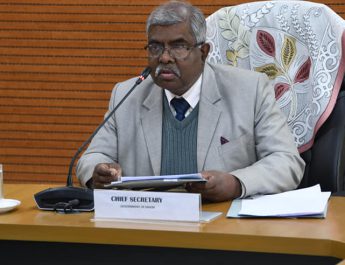 CS reviews progress of preps for VP’s visit to the State, expresses satisfaction over preparedness