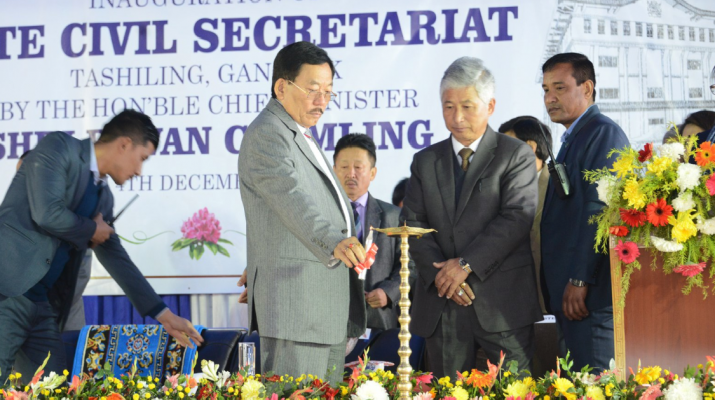 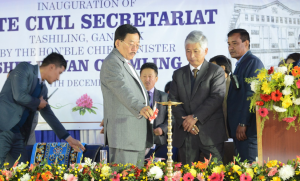 Gangtok, Dec 4: (IPR) Chief Minister Shri Pawan Chamling inaugurated the new State Secretariat at Tashiling Gangtok today. With this inauguration, the State will have a State-of-the-Art infrastructure which can accommodate all important offices of the Government of Sikkim. Built at a project cost of Rs. 264.30 Crores, the project has been executed through a Kolkata based construction firm M/S Archtech Consultants Pvt Ltd on turnkey contract. The foundation stone of the project was laid by the then Governor of Sikkim Shri Balmiki Prasad Singh on the 1st of March, 2013, in the presence of Chief Minister Shri Pawan Chamling.

After formally inaugurating the multi-storeyed new Secretariat building and taking a round of the new infrastructure, the Chief Minister addressed a gathering comprising of the State Government machinery. In his address, Chief Minister Shri Pawan Chamling congratulated all the State Government employees for the new state-of-the-art infrastructure created by the Government for effective administration. Terming the occasion as historic, he dedicated the Secretariat to the people of Sikkim and went on to announce that the new Secretariat should be fully functional from the 2nd of January, 2019. He directed all the concerned Departments operating from Manan Bhawan and other rented establishments to immediately shift their offices to the new premises. He appealed to the officers to enter the new Secretariat with a positive mindset and a problem-solving attitude.

The Chief Minister further urged the bureaucracy to be humane and compassionate while dealing with people-centric schemes and programmes. He categorically stated that there should be no delay or anomaly in the implementation of Government policy decisions. Schemes like Medical Aid, Old Age Pension, Ex-Gratia, Student Scholarship, Maternity benefit, and Land to Landless should be made available to the people without bureaucratic delay, he stated. He added that the Government’s decisions such as Jobs on compassionate ground to immediate kin, issuance of trade licence, strict check on entry of chemical fertilizers in the State, policies regarding posting and promotion should be strictly adhered to. He maintained that posting is done in the interest of the Government and not in the interest or willingness of the employee. Stating that with equal rights come equal responsibilities, he urged the State Government employees to perform their duties with utmost sincerity. He said that in the last twenty four years, Government employees have benefitted the most in terms of promotions.

Further, the Chief Minister stated that the new Secretariat will continue to be called ‘Tashiling Secretariat’ because of its historical importance and the sentiment of the people attached to the place. He said that the Secretariat is a modern architectural marvel which will address the psychology of the employees and visitors alike. The place will offer the employees a cheerful ambience and conducive environment to work. “Cultural and historical aesthetics have been incorporated in the new Secretariat, which will be a one-stop centre for visitors and researchers to know Sikkim’s culture and history, he added. He said that the Secretariat will have support infrastructures like pedestrian walkways, water fountain, garden, bus bay, and adequate parking facility.

The Chief Minister added that the second phase of the work will continue and all efforts will be made to decongest the place leading upto the State Legislative Assembly on one side and the Nehru Statue near Ridge Park on the other. He informed that the Government is contemplating on introducing new methods of public transport and traffic management to tackle the challenge of increasing traffic in the capital. He informed that the road from Adampool to Banjhakri Falls near Ranka will be completed for vehicular movement within a month’s time. Likewise, the road from Lower Syari to Ranipool is in the stage of completion and will be operational very soon, he informed. These two roads will help divert the traffic to a great extent, he added. He urged all the stakeholders and people at large to provide feedback and suggestions and to take ownership and responsibility to sustain these infrastructures.

On the occasion, Chairman, Archtech Consultants Private Limited, Shri Shamalendu Ghoshal was presented the Certificate of Project Completion by Chief Minister Shri Pawan Chamling for successful completion of the project.

Earlier, PCE-cum-Secretary, Building & Housing Department, Shri R.B. Thapa in his welcome address attributed the successful completion of the new Secretariat to the strong will and farsighted vision of the Government. 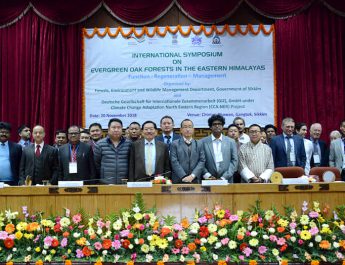 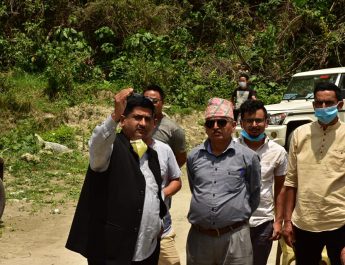 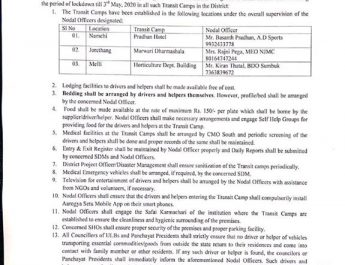 Three transit camps have been established