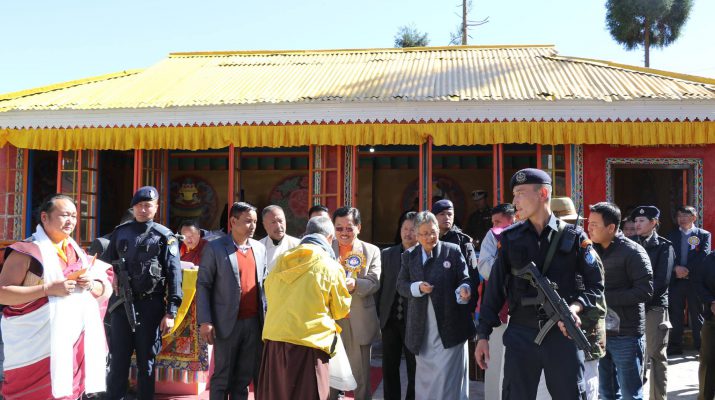 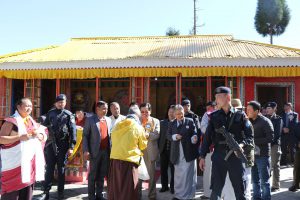 The area MLA Shri Ugen Nedup Bhutia , accorded a formal welcome and informed that the monastery is one of the oldest monastery of Sikkim and is almost 178 years old which was constructed as a royal chapel by the 8th Choygal of Sikkim when the Capital was shifted from Rabdentse to Tumlong in 1814. During the earthquake of Sept 2011 the structure was badly affected and the Honourable Chief Minister had granted a fund of Rs 1 crore for retrofitting and thus the task of renovation was accomplished.

The Labrang Gumpa Committee/Duchi felicitated the Honourable Chief Minister and offered sincere thanks for his concern for the development and upliftment of the monastery. The HCM also distributed cheques to Labrang, Phensong, Kabi and Tanek Gumpa Duchis. The Honourable Chief Minister during his address expressed his happiness on being able to come and witness the Cham and receive the Blessings of Venerable Rimpoche and Lamas.
He made the following announcements during his address.
• Supplementary grants of Rs 75 lakhs for further development of the Labrang Palden Phuntshol Gumpa .
• Rs 2 crore funds for the tourism Infrastructure Project in the area within the next Financial year.
• Sanctioned the construction of Kalsang Manilakhang and Rs 10 lakhs to be provided within the Month of December.
• Sanctioned the construction of Vajrapani Statue at the location where, earlier the venerable Lachen Gomchen Rimpoche is said to have mediated.
• One person job to jobless family. He said within December appointment orders would be passed and such appointments would be regularized after five years.
• He also announced to provide 80 laptops to students of JNV School Phodong.
• The Honourable Chief Minister also announced to construct the statue of three venerable monks Lha-tsun Namkha Jigmed, Kathog Kuntu Zangpo and Nga-Dag Sempa Phuntsok Rinzing who coronated the first King of Sikkim Chogyal Phuntsok Namgyal in 1641 at Yuksom . He shared that because of the contributions of the three lamas Sikkim became a country and later a State and was not lost in Oblivion. He said that it was an effort of the present Government to preserve the rich History of Sikkim.

The Chief Minister stated that his vision of turning Sikkim into a Singhkham is a reality today. With the inauguration of the statue of Cherinzig in Sangacholing West Sikkim, the installation of the trinity of Buddha, Guru Rimpochee and Cherinzig in Sikkim has made Sikkim pure like a Chosum or the worship place of the Buddhists. He informed that a sky walk has also been constructed and is a major tourist attraction in the vicinity of the statue and construction of ropeway is on the pipeline. He said that however the mindset and hearts of the people living in this pure land should also be pure and referred to it as” Sempa Dzangpo”. All should live in harmony and free of hatred. He said that till date Sikkim has been able to maintain peace and security and is free of insurgency . All sections of people are able to carry their activity without fear of any illegal taxes by insurgents. He reiterated that the Government has safeguarded the rights of the natives by all means and we all have a big responsibility and sense of ownership towards our land and least it should not go into the wrong hands and wrong governance. He said that the present Government has always worked towards protecting the special status of Sikkim and the Revenue Order No1. He said that all rights and Privileges accorded by the Chogyal has been protected by the present Government and he said that good work should be appreciated .

The Chief Minister stated that Sikkim has undergone tremendous development during the last two decades of his Government. The quality of life of the Sikkimese people has improved and people have prospered in the State. Thus the good work and the good governance of the present Government should be appreciated by the people and people should abstain from Communal Disharmony being promoted by vested interest.

Speaking on the Organic branding of the State, he said that the youths of North Sikkim should explore the possibilities in Organic Farming and market organic produce like dairy ,meat worldwide by making value addition. He said that Agri-horticulture never gets outdated and will exist long as human society exists and thus it is a super industry .Thus he delivered the message to the youths to use this, as a medium to become self sufficient and self reliant. He also motivated the youths to be progressive and explore ways to improve their quality of life. He said that they should go into innovative business and invest in Agro forestry where land is unproductive ,Homestay Tourism etc. The organic Philosophy was in consonance to the Buddhist philosophy of Non violence and monks should endorse the organic revolution . He said that in Sikkim a Buddhists University has also been established by the present Government so that the monks can pursue higher education and also can pursue Sowa Rigpa Amji Medicine.
He said all works demanded by the people during the 32 days tour has been sanctioned and works for carpeting of roads and other roadwork has already been started

He urged the students to focus on studies and take education seriously. The certificate oriented education requires them to pass the school and university exams however the students should also focus on acquiring life skills and pass through the challenges that life throws.
Later in the day he also interacted with the public personally and heard their problems. He then proceeded to Phodong Gonpa and there he inaugurated a new chosum built in honour of His eminence Late Karma Thupten Tashi ,Head Lama of the Gonpa and lighted the chime in his reverence. 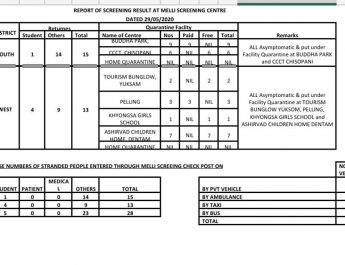