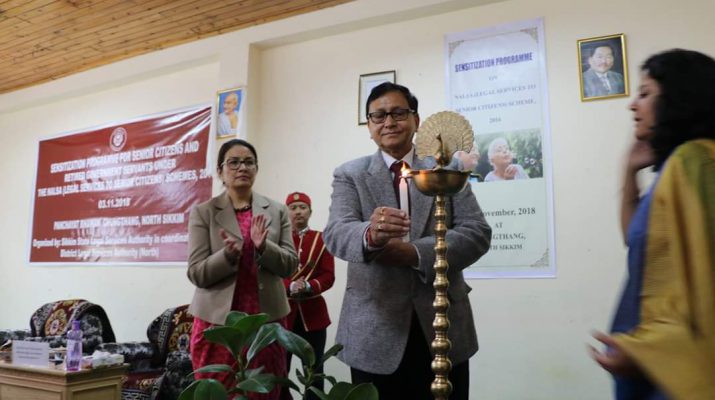 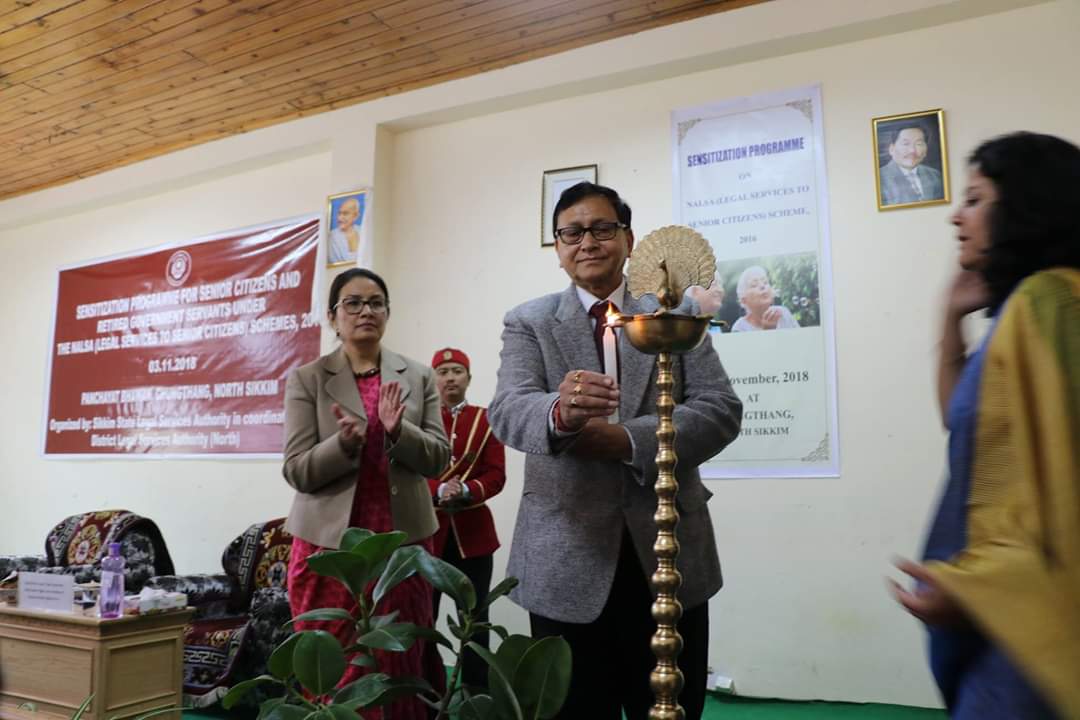 The programme was also attended by the Judges from the District Court, North Sikkim, District Collector North, SP North, SDM Chungthang, DIO, officials from Chungthang sub-division, Panchayats of Chungthang, Pipons of Lachen and Lachung and local public of the sub-division.

The Chief Justice who was attending the first programme in Sikkim after his swearing in recently stated that he was happy to visit Chungthang sub division. Speaking on the topic of Maintenance and Welfare of Parents and Senior Citizens Act 2007, he stated that it is duty of children to accept the responsibility of taking care of their parents.

As per the Indian traditions and customs, parents are considered as “Pitri Devta” and their contribution to the welfare of the children cannot be compensated. The role of the mother and father in raising the kids despite their difficulties cannot be forgotten, he added.

He urged the para legal volunteers to help the Senior Citizens in getting Redressal to various legal issues being faced by them. He also urged the district officials to give a sympathetic and helping attitude while dealing with the cases involving Senior citizens.

Justice Meenashi Madan Rai while addressing the gathering stated that the main role of the SLSA and DLSA was to provide awareness to the people on various acts and laws. She urged the public to make full use of these camps for making themselves aware on various provisions of different laws. She stated the intention of the today’s session was to provide awareness on the Maintenance and Welfare of Parents and Senior Citizens Act 2007.

Today, when there is rising number of cases of diseases such as dementia and Alzheimer’s in senior citizens, it is the duty of the children to provide care to their parents. As per the Act, it was the duty of the children to maintain their parents and if a person fails to maintain their parents then the senior citizens can approach the tribunal of Sub Divisional Magistrate for providing Redressal. The District Magistrate is the appellate authority and can be approached if they are not satisfied with the order of the SDM, she added.

She also advised the Panchayats and Pipons not to settle cases under POCSO and other grievous crimes and the elected representatives should not mediate in such cases. She stated that such non compoundable cases should be strictly dealt only by the courts.

During the programme, Shri Liladhar Ghimerey, Accounts Officer from Finance Revenue and Expenditure Department explained the state pension scheme and benefits under the scheme to the retired employees of the State Government.

Likewise, Senior Superintendent of Police Shri K Shanderpa briefed the gathering on the do and don’t regarding the safety of senior citizens.

The Chief Justice also visited the site for the construction of sub-divisional Judicial Complex at Chungthang and inspected the progress of the work. He directed the concerned engineers and contractors to make rapid progress and hand over the complex on the scheduled time. 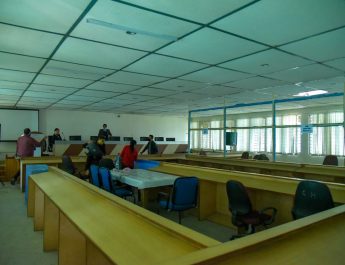 Arrangements for counting for Municipal Elections, 2021