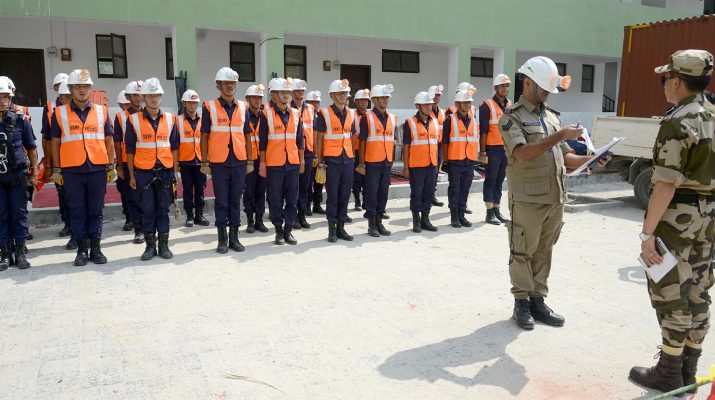 Gangtok, 10 Oct (IPR): A massive State level mock exercise for an earthquake scenario was played out to perfection today at different pre-designated locations in the State capital and in all the four districts of Sikkim.

The mock exercise was planned and executed through an Incident Response System protocol designed by the National Disaster Management Authority which is followed to tackle disasters throughout the country. The entire exercise at the State level was headed by Chief Secretary who was the Responsible Officer (RO), along with the State Relief Commissioner as the Incident Commander in charge of issuing all the orders. They were assisted by a set of officers and field staff and all stakeholders. A similar protocol was followed at the District level with the District Collector being the Responsible Officer, aided by the ADC or SDM as the Incident Commander and other officers of the district administration taking various roles and responsibilities.

A mock scenario was created where an earthquake of magnitude 8.7 on Richter Scale struck at 11:15 am, with its epicentre at Shillong, Meghalaya. Strong tremors felt across Sikkim and West Bengal triggered situations of landslides, building toppling, stampede, fire and challenges of evacuating large number of people from a campus.

The State Emergency Operation Centre or the Main Control Room was setup at the SSDMA office at Manan Kendra. The staging area was set up at Paljor Stadium from where all men and resources were mobilized to all the locations. The five locations were – a landslide scenario at Sichey, building toppling near Vajra Cinema Hall, Fire outbreak at Khadi Bhawan Deorali, Stampede at Reliance Trends Store in MG Marg and mass evacuation at Nar Bahadur Bhandari Degree College Tadong. Apart from these locations, STNM Hospital and CRH Manipal were roped in for medical emergency services.

At the District level, all the incidents were staged in and around Rangpo town while the Control Room, the Staging Area and the relief camp were set up at mining ground Rangpo. 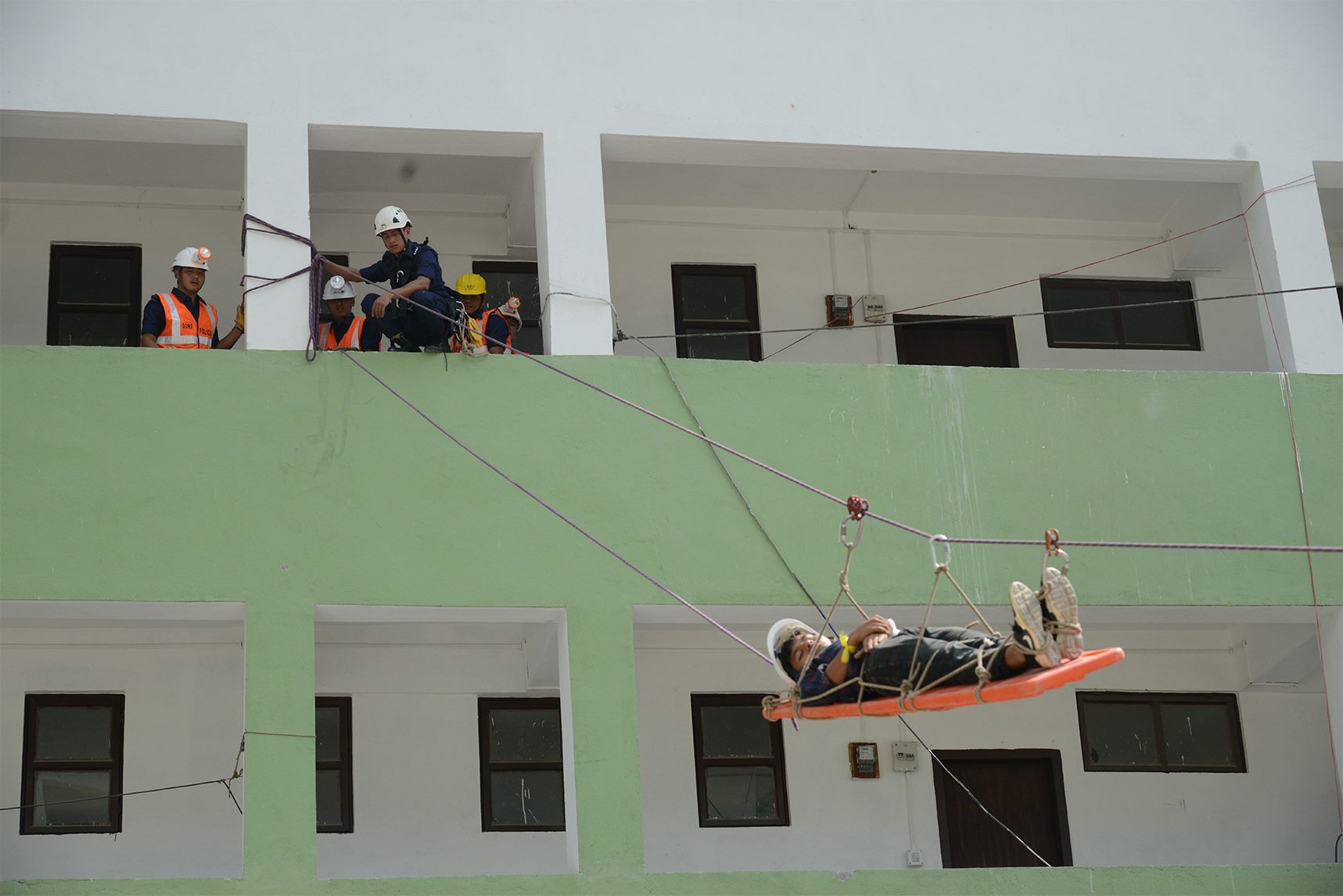 A scenario was created where a major fire broke out at Khadi building located in Deorali immediately after the earthquake struck. It was reported that short circuit in the main electric box of the building led to the outbreak of fire. Real time scenario was played out where people were trapped inside the building and the Energy and Power Department was asked to cut the power supply immediately. The relief and rescue operation was neatly choreographed giving a feel of a real life disaster. Police, Fire & Emergency, the SSDMA and all line Departments participated in the mock exercise.

Similar activities were staged and played out at three other locations where coordinated efforts were seen from all response teams and composite task force constituted for executing the rescue and relief work.

At the district level, as soon as reports of earthquake incident that was stated to have occurred at Rangpo, started flowing in from the various areas of Rangpo. SDM, Rangpo and other senior officials reached the Control Room at Mining Ground, Rangpo. They analysed the situation and issued instructions for responding to the earthquake.

Five multiple incident areas were selected in Rangpo Sub Division for the purpose of this mock exercise such as building collapse at Rangpo Bazaar, fire out break at Slum Area, drowning at Rangpo Khola, blockage of Rorathang road due to landslide and blockage of Duga road due to tree fall near Chanatar. Simultaneously, officials also assembled and formed response teams which swung into action immediately. The exercises were conducted in coordination with Police, Fire Service, Forest Department, Army, Health Department, State Disaster Management Authority, Civil Defence and all line Departments.

In Rangpo, Mining Ground was selected as staging area to deploy the task force. The team of SDRF, police, army, civil defence and medical reached the staging area within 15-20 minutes of the information being relayed.

Expressing his views, District Collector (East), Shri Kapil Meena, said that these drill efforts were made to ensure effective participation of local bodies to deal with any eventuality and to take preventive measures in case of an earthquake. He also applauded the role and responsibility of the officials.

Later, while debriefing the State Level Mock Exercise, mock drill observer, Captain Pritam Reddy, said that the mock exercise was excellent and appreciated the efforts of the Disaster Management Authority and other line departments concerned along with the district administration for working in coordinated manner.

In Rangpo Mazi Goan, incident of fire break out and building collapse was conducted. Blockage of Duga road due to tree fall near Chanatar and Blockage of Rorathang Road due to Landslide. Drowning incident at the riverbank of Rangpo river. The control room and the relief camp for the said mock drill was set up at Mining Ground wherein the incident report of all the areas were reported to the SDM (Rangpo) and the concerned officers of line departments.

During the debriefing session, SDM (Rangpo), who was the Incident Commander, gave an overview of the mock drill conducted at various places of Rangpo. He informed that these mock drills were conducted to create awareness on how one should react when an earthquake occurs.

After the State level mock exercise, all the stakeholders, observers from the army and responders on the ground gathered at the mini auditorium at Manan Kendra for de-briefing on the day’s exercise. The independent observers deputed at various locations gave feedback and suggestions on the mock exercise. The Site Supervisors assigned at each location also shared their experiences and the learnings from the exercise.

Senior Consultant (ME & IRS), NDMA, General V.K. Datta, who was instrumental in designing the mock exercise and guiding the SSDMA, commended all the participants for good coordination and execution. He stated that lessons learnt from this mock exercise can be used to improve upon the Response System in the State.

Later, Chief Secretary, Shri A.K. Shrivastava, interacted with the District Collectors and officers of the district administration through video conferencing and took feedback about the mock exercise carried out in the Districts. Commending the efforts of everybody involved in the mock exercise, he stated that this was the biggest mock exercise staged in the State as it was spread over the day and throughout the State. He said that all the feedback and the gaps have been noted and will be addressed on priority.

State Relief Commissioner, Shri Tashi, in his concluding remarks thanked the Chief Secretary for guiding and supporting the exercise right from the coordination meeting held on 25 Sept to the table top exercise on 09 Oct and the final mock drill today. He also thanked General V.K. Datta for his guidance and help to make the exercise possible. 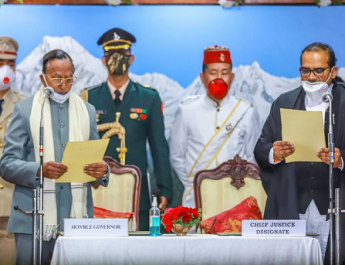