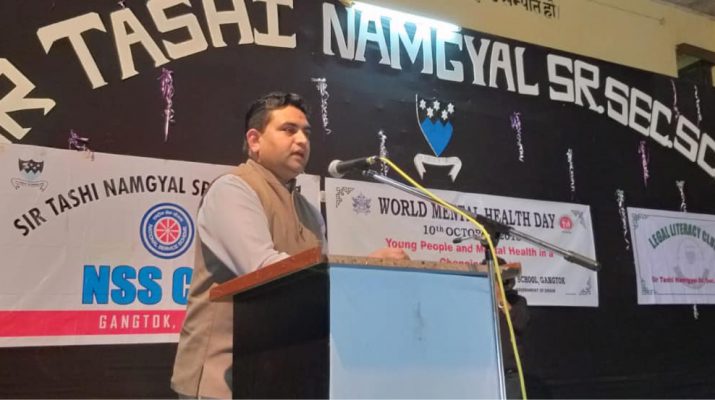 Health Minister, Mr. Arjun Kumar Ghatani, who attended the event as chief guest, informed about various activities carried out by the department in all four districts to address issues of Mental Health. A total of 160 training programmes have been organised on Mental Health in the year 2018 in all four districts of Sikkim, it was informed. Mental health programme was implemented from the year 2002 with 20 bedded indoor patients services with daily OPD and emergency services at STNM Hospital under the senior psychiatrist and the programme has been extended to all other four districts as well, he added.

Addressing the students, the Health Minister drew lights on creative aspects and values of life and stressed on living balanced life, psychologically, mentally and physically. People should keep trying to develop constructive healthy thought process and imbibe all those traits which ensure our inner purity, he added.

He enlightened students on meaning and value of time in everyone’s life and suggested for psychiatrist and counselling in case they need any kind of help. He also informed on functional Suicide Helpline Number at STNM Hospital and also motivated the Students to take up Yoga exercise, meditation and music with dedication in a proper time frame for self-realisation and stress free life.

He also elaborated on the amendment made in Sikkim Anti Drug Act (SADA) by the State Government in recent assembly session. He said that the State Government has been working on youth friendly policies to preserve and encourage their fields of interests. Further, he also encouraged in writing essays on the theme of the programme from the student participants. The Minister also spoke on commitment of the State Government to eliminate Tuberculosis in Sikkim by 2022.

Resource person, Dr. Bishnu Sharma (Psychiatrist from Central Referral Manipal Hospital), presented his talk on Young People and Mental Health in a Changing World. He enlightened students on technical aspects of mental health and resilience to recover and also led the interactive session.

During the programme, theme based speech was also presented by the students and other participants.

Earlier, Director, Dr. Jigmee Topgay, proposed the welcome address and also informed that the World Mental Health Day was observed in all districts and health centres in the State of Sikkim. 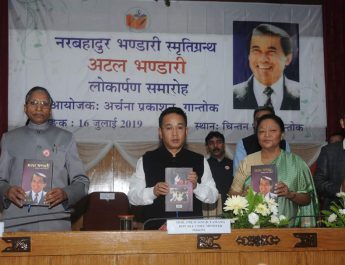