Skip to content
News
June 15, 2022June 16, 2022
Posted By: Jeetan Sherpa 8 Views 0 Comment
Namchi,15th June (IPR): Intensified Diarrhoea Control Fortnight was formally launched by ADC (Namchi) Mr Satyan Pradhan at Namchi District Hospital, today.
The event was also attended by Joint Director, Education Department Mr G.P. Sharma, Deputy Director, Education Department Mrs Angela C. Chingapa, CDPO (Namchi) Mr. Laxman Tamang, AD (Nutrition) Ms. Shophia Tamang, ASHA and Anganwadi Workers.
The significance of organising this event was to make people aware about the fatel death caused by diarrhoea especially children below the age of 5 years and various measures and precautions to be taken during this disease.
The Chief Guest Mr. Satyan Pradhan during his address expressed his gratitude towards the staff members of ASHAs and Anganwadis for their immense support and dedication towards the society. He emphasized them to go to the ground level so as to fight against this dreadful disease. He further stated that Diarrhoea is a curable and preventable disease but if its neglected than it can lead to the death of a person, so he requested the ASHAs and Anganwadis to make people more aware of the disease and to impart adequate knowledge about the various steps to be taken against it. He further requested the Joint Director of Education department to make it mandatory in all the schools to adopt the proper steps of handwashing techniques so that all the students would inculcate this habit from their childhood itself. He also said that making people aware about postive health habits is not just the work of the Health Department but all the departments should jointly work so that the society would lead a healthy life.
Furthermore, CMO (Namchi District Hospital) highlighted about the basic measures to eradicate diarrhoea death rates. He said that diarrhoea has become a major concern all over the world and that it has become the third largest death rate in developing countries. He further elaborated that the faulty technique, improper food habits, open defecation and various other causes lead to diarrhoea and may even lead to death. He added that diarrhoea can be prevented if proper handwashing technique is applied, that the drinking water should be boiled atleast for ten minutes and that if an infant is given an exclusive breast feeding till six months then the immunity of a child becomes strong so as to fight various viruses and bacterias. He requested all to come forward to reduce the percentage of death rate due to diarrhoea and to make people more aware about the preventive measures to controll it.
During the event DRCHO (Namchi District Hospital) Dr. Junita Yonzon presented an informative presentation which stated about the causes leading to diarrhoea and various methods which can be adopted to control and prevent this dreadful disease.
The event also witnessed a handwashing demonstration by Mrs. Krishna Rai (ASHA Worker) and a demonstration of ORS prepration by Mrs. Lalita Chettri (Anganwadi Worker 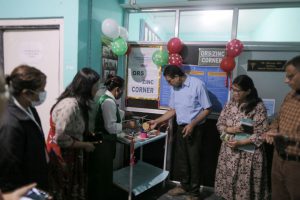 Containment Order from the Office of DC East