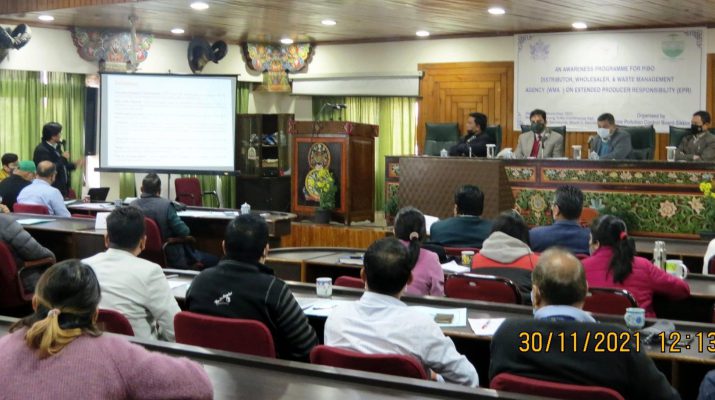 Gangtok, November 30: A meeting on plastic waste management with special focus on Extended Producer Responsibility (EPR) was organized by the State Pollution Control Board Sikkim at the Sidkeong Tulku Conference Hall in Forest Secretariat, today. The meeting presided over by the Chairman SPCB Sikkim, Dr Thomas Chandy was attended by officials of SPCB Sikkim, Urban Local Bodies, Forest and Environment Department and other departments apart from the distributors of consumer goods, industrialists, leading waste management agencies of the country and representatives of small and medium enterprises.

Welcoming the gathering, Member Secretary, SPCB-Sikkim Dr. Gopal Pradhan stated that the purpose of the meeting was to generate awareness among stakeholders on the concept of EPR. He stated that EPR did not have the desired effect in the State so far, as there was a gap in the plastic waste generated and collected. He stated that Producers, Importers and Brand Owners (PIBO) had an obligation by law to collect the plastic waste generated by the products they introduced into the market.

Executive Environmental Engineer, SPCB Sikkim Shri Ranjan Rai made a power point presentation on the principles and stipulations of EPR in the proposed new law of the Ministry of Environment, Forests and Climate Change which will take effect shortly.

In the interactions that followed the participants gave inputs about their experience on the working of the EPR mechanism and made suggestions to improve waste collection in the State.

Extended Producer Responsibility is a concept that is part of the Plastic Waste Management Rules, 2016 which casts an obligation upon all producers, importers and brand owners to collect the plastic waste generated by the marketing of their products. The PIBOs are obligated to collect 100% of the plastic waste put out by them by 2023-24 and reuse and recycle most of this waste.

Dr Thomas Chandy in his closing remarks stated that there was a good opportunity for local entrepreneurs to enter the recycling business which is economically viable due to the thriving fast-moving consumer goods market in the State. 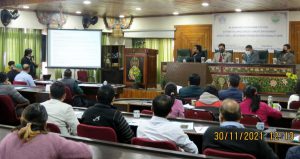 De-notifications of Containment Zones in East District by DC East

Press release from the Office of Dy.Inspector General of Police(Range) 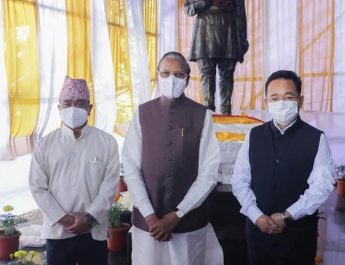 Bhanu Jayanti observed at the capital