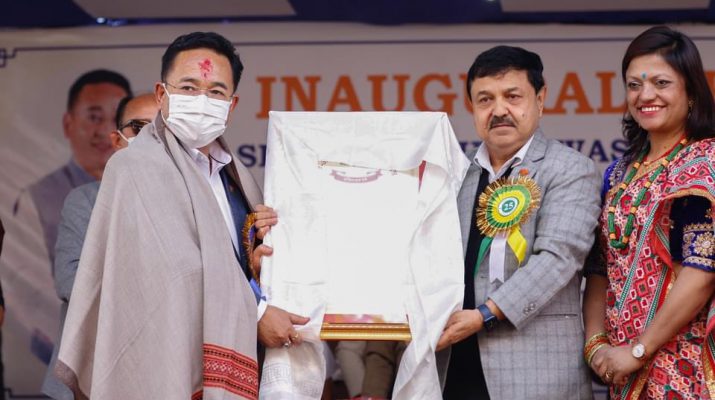 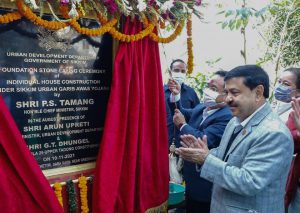 Extending gratitude to the Chief Minister for gracing the occasion as chief guest, Principal Secretary, RDD, Shri C.S. Rao, said that the SGAY is a flagship programme of the State government initiated to transform the rural landscape for the poor and marginalised section of the society. He added that this housing scheme aims at facilitating dignified housing for the poor in order to improve the quality of their lives by providing basic amenities. He informed that a total number of 1,463 houses under SGAY are close to completion and will be ready for inauguration by the end of March 2022.

Addressing the gathering at Phala ground, Chief Minister Shri Prem Singh Tamang congratulated the three beneficiaries of the SGAY housing scheme and applauded the efforts and dedication of the RDD Department for timely completion of houses under the SGAY, despite the pandemic and other hurdles.

The Chief Minister also mentioned that the State Government has recently launched ‘Sikkim Urban Garib Awas Yojana’ (SUGAY), the first urban housing scheme in Sikkim, to cater to the urban poor. The scheme is first of its kind in the country which ensures that every citizen has a roof over their head. He also stressed on the need to address the growing levels of urban poverty in the State and urged all the stakeholders to work in coordination for effective implementation of the scheme.

The programme was also addressed by UDD Minister, Shri Arun K. Upreti, and RDD Minister, Shri Sonam Lama, wherein they thanked the Chief Minister for the developmental works during the course of his leadership and further appealed the public to play the role of a supervisor whenever a government project or scheme is underway.

Area MLA, Tadong, Shri G.T. Dhungel, in his address, thanked the HCM for introducing these schemes for the welfare of the poor. He expressed gratitude on behalf of his constituency for the development projects sanctioned by the State government.

Calling it a historic achievement, UDD Secretary, Shri M.T. Sherpa, outlined that the housing scheme SUGAY is aligned with the Sustainable Development Goals set forth by the United Nations namely Goal 11: Sustainable Cities and Communities by providing affordable and safe housing to the urban poor, Goal 5: Gender Equality by allotment of housing flats in the name of the female head of the household and Goal 3: Good Health and Well Being by providing well designed individual houses and group housing. He also took the opportunity to thank the HCM and the State government for gifting Sikkim with its first fully State-sponsored urban housing scheme. The scheme also focuses on encouraging gender neutrality movement by providing ownership to the head female member of the house, he added.

Earlier today, the Chief Minister also laid the foundation stone of one house under the Sikkim Urban Garib Awas Yojana (SUGAY) near Greendale School in Daragoan before attending the inaugural function.

Containment order from the office of DC North 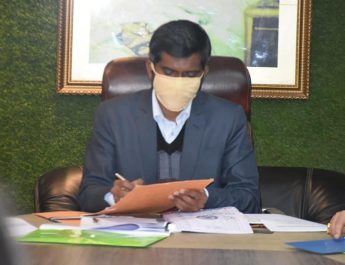