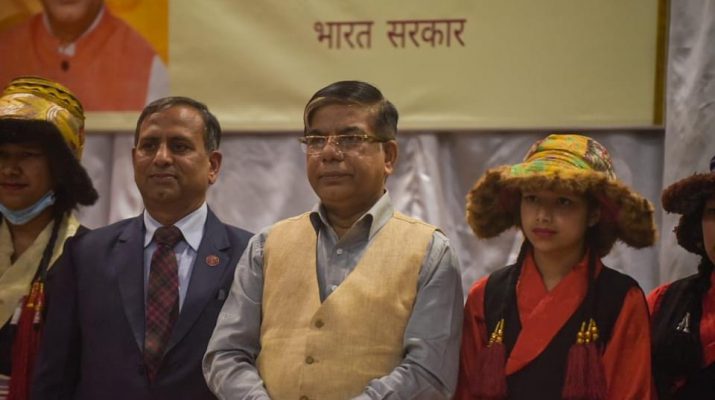 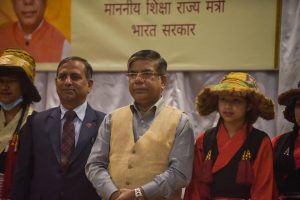 Addressing, the gathering, Dr. Subhas Sarkar congratulated NIT, Ravangla in getting new laboratory and academic blocks and hoped that these blocks will be utilized by the students to its fullest capabilities and will aid in imparting quality education and conducting research at cutting-edge technologies. He said that it is impressive for NIT, Sikkim as the Institute has shouldered the responsibility to implement various schemes and initiatives launched by the Government in diverse fields like Machine Learning, Artificial Intelligence, Evolutionary Algorithms, Internet of Things, Cloud Computing and in many more educational departments. The Minister spoke about the limited infrastructure and research facility available at the temporary campus at Ravangla, however he added that the institute has played a pioneering role in fostering and nurturing an ecosystem of startup and entrepreneurs, so that the graduating students can become job providers rather than job seekers. He appreciated the students of the institute who are encouraged and nurtured for innovation and creativity. They have also launched their own start-ups and applauded a Civil Engineering student Prince Raj for setting up his own company named ‘Agridhaan Global Pvt Ltd’ and successfully running the company with this regard he urged other students to set up their own startups.

The Minister also appreciated that NIT, Sikkim is in the process of acquiring land for the establishment of its permanent campus at Khamdong in East Sikkim and thanked the Chief Minister Shri P. S. Tamang for realizing the importance of permanent campus of NIT Sikkim and allocating the land on priority basis.

The Minister also said that education has been affected by the Corona pandemic and valued the efforts in implementation of online teaching by the Institutions. He informed that NIT Sikkim has also successfully conducted online teaching while maintaining the quality of education through various innovations. The Minister updated that the world has entered into the 21st century and as a developing nation the country must keep pace with the scientific, technological and industrial development hence the Prime Minister Shri Narendra Modi has announced to build ‘Atma Nirbhar Bharat’ with the vision to transform this great country into a developed nation and regain its image of ‘Sone Ki Chidiya’.

Dr. Subash Sarkar underlined that it is the duty of the institutions to provide leadership and mentorship to younger generation and empower them to aid in the country’s development and make itself self-reliant and build an Atma Nirbhar Bharat.

The Minister also spoke about the rich tradition of our country and informed that our country was known for its world class institutions such as Nalanda, Vikramashila and many others. He emphasized that it is the responsibility of the educational institutions of India to explore our rich culture, heritage and ancient treasure of knowledge to build an equitable and just society. He also spoke about National Education Policy which was drafted and launched under the leadership of Prime Minister Shri Narendra Modi. Accordingly, NEP focuses on five main issues easy accessibility, equity, quality, affordability and accountability. In this era of knowledge, NEP will transform the Indian education ecosystem and re-establish the image of this great nation as ‘Vishwa Guru’, the Minister added.

Delving on COVID-19 pandemic, the Minister said that the Government of India is concerned and will always stand with the people of this country for any help. He said that as a country the management of pandemic have been done very efficiently and with utmost sincerity. He also extended his appreciation towards the scientific community of the country for developing Corona Vaccine, Covaxin and Covishield and added that more than 100 crore people have been vaccinated and remaining will be vaccinated soon.

Director NIT Sikkim, Prof Mahesh Chandra Govil extended a warm welcome to the chief guest Ministry of Education Dr. Subash Sarkar and thanked him for his visit. The Director apprised the gathering on the achievements and growth of the Institution over the years and the roadmap ahead. He also informed that the new infrastructure created in the Ravangla campus of NIT Sikkim is to provide wholesome technical education to the students even though the Institute has been operating from a temporary campus. The students of NIT Sikkim who earlier had to complete their lab assignments at other IITs and NITs are now fully catered to in the Ravangla campus itself due to installation of high end equipment and creation of necessary labs. The rising enrolment number of students at NIT Sikkim with excellent placement record speaks volumes of the rapid development of the Institute.

The Minister was also apprised on the status of allocation of land for establishment of permanent campus which has been proposed at Khamdong East Sikkim. The handover of land from the State Government to NIT Sikkim is anticipated soon and construction of a World class Institution would be commenced thereafter. The Director thanked the Chief Minister Shri P. S. Tamang, Area MLA Khamdong and other officials of the State Government and the Ministry of Education Government of India for their constant support in this regard. 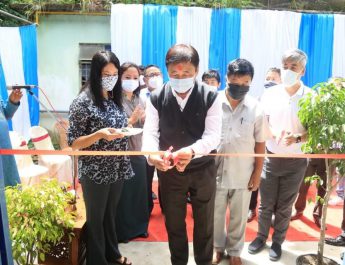 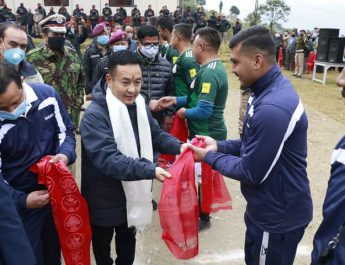