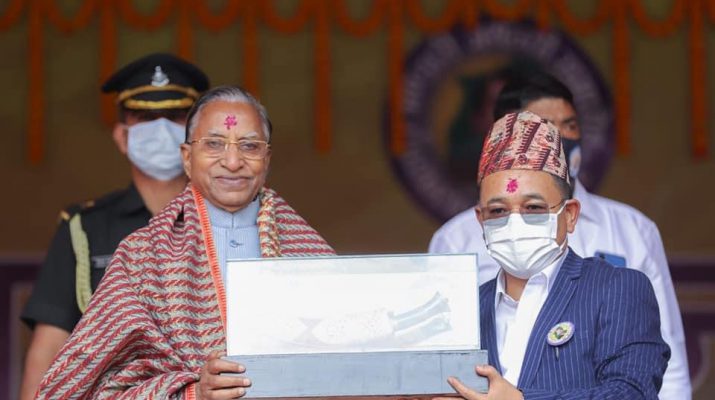 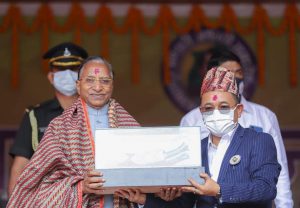 Welcoming the guests and the gathered audience, the MLA cum patron of the organizing committee, Shri Aditya Golay extended his sincere gratitude for accepting the invitation to be a part of the celebration. He briefly spoke on the importance of the day while highlighting the contributions made by Late Shri Bhandari. On behalf of the entire sub-division, he conveyed his gratitude towards the Government for the decision to upgrade Soreng as a District. In his short speech, he said that the Government has been carrying out development in every field and he is positive that the local community will play its equal roles in helping the Government to build a stronger and resourceful State.

Chief Minister Shri Prem Singh Tamang in his address extended his warm greetings and best wishes to everyone on the occasion. He spoke about the celebration being the third time since its inception in 2019 and that this year’s celebration is being done in a grandeur manner to commemorate Late Shri Bhandari’s contributions and the struggles he faced to bring together a small hilly community who otherwise did not have a National Identity. He fondly remembered former CM’s words about Sikkim who often considered Sikkim to be a beautiful garden that belonged to everyone and it is the very reason that all of us despite belonging to different cultures, languages and social values live harmoniously.

The Chief Minister further recounted Late Shri N.B. Bhandari’s relentless efforts towards the fight for Nepali language to be included in the Constitution of India. He added that Late Shri Bhandari was the first leader of Nepali origin to become the Chief Minister of an Indian State.

The Chief Minister enumerated the responsibilities and policies that the Government will be implementing. He announced that each year any student who secures admission for Ph.D. or Doctorate in one of the top 20 universities anywhere around the world, the Government will be providing them financial aid up to Rs. Fifty Lakhs under the Nar Bahadur Bhandari Fellowship Program. Adding on this, he said that after the successful completion of their studies, the student will be given an opportunity of three years of voluntary service under the Government of Sikkim. He also informed that all the works and writings of Late Shri Bhandari will be documented and published by the Government. He informed that the books written by or about the former CM have been bought and distributed to education institutes by the Government.

He took the opportunity to declare that henceforth every year August 20 will be a public holiday in the honour of all those fighters who fought for the recognition of Nepali Language in the Constitution. He urged everyone to celebrate the day with cultural programmes and activities that will help us stay connected to our roots and traditions. In his concluding remarks, he congratulated the organizing committee for successfully hosting the Celebratory ceremony.

The Chief Guest for the occasion, the Governor then addressed the gathering by warmly welcoming all the attendees. He said that he was glad to be a part of the celebration and spoke about the contribution made by the former CM. He said that the people of Sikkim are fortunate enough to be guided by such a heroic figure who had dedicated his entire life for the betterment of his people. He reminded everyone that late Bhandari strived for the upliftment of his State and that he still resides in the hearts of all his fellow-citizen even after his death.

The Governor highlighted about the development schemes that are being carried out by the Government and encouraged everyone present to work together in building a strong State that will eventually lead to a stronger Nation. He added that Sikkim can become an exemplary State in the field of health, education and tourism for others to follow but for this, the local community must come forth in guiding and providing necessary support. With the construction of the upcoming Netaji Subash Chandra Bose Centre of Excellence at Chakung under the New District plan, Soreng will become the new educational hub for students wherein students from around the country can acquire better education, Shri Prasad added. He said that Sikkim being a tourist-friendly State has a huge opportunity for everyone to benefit from. He finally ended his speech by extending his best wishes to everyone while quoting that personal growth will lead to State Growth which will eventually lead to the Nation’s growth.

At the start of the programme, the Chief Guest and all the esteemed invitees were felicitated and offered traditional topi and a Nepali symbolic souvenir, a Khukuri from the Organizing Committee.

On the occasion, officials from the Education Department presented a souvenir and a traditional shawl as a token of appreciation to the Chief Minister.

While continuing the felicitation ceremony, the Department of Labour honoured those Covid warriors, who sincerely performed their assigned responsibilities, especially during the pandemic, with a cash prize of Rs Five Thousand each.

Circular regarding RAT testing in the North District 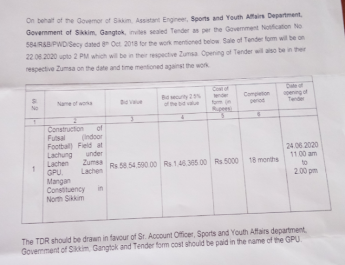