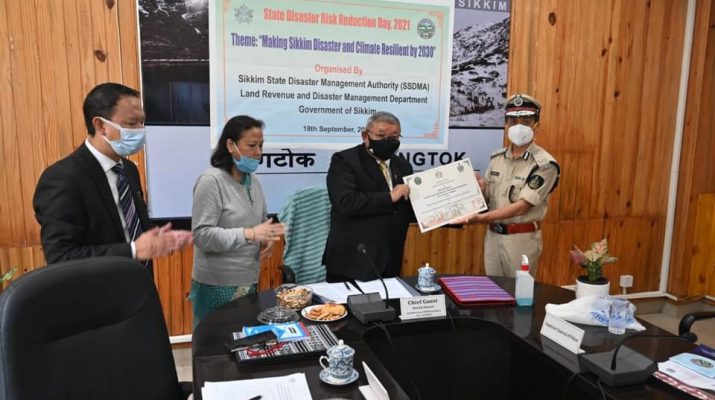 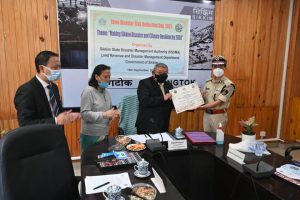 The programme which was organised by Sikkim State Disaster Management Authority (SSDMA) had the theme “Making Sikkim Disaster and Climate Resilient by 2030”. This day also marks the 10th year anniversary of the 2011 earthquake in Sikkim which caused devastation on a huge scale and also took several lives.

The main objective of the programme was to take various measures to get an early warning system and build resilient infrastructures in the face of natural disasters in Sikkim.

A short video of the topic was also presented which included activities of SSDMA. During the programme, handing over of rescue equipment to members of State Disaster Response Force (SDRF) was conducted. The programme also included announcement of the winners of school essay competition and video competition on the topic of climate change and natural disaster.

The Hon’ble Minister in his address acknowledged the fact that Sikkim lies in one of the most complex topographical and geological settings which makes it vulnerable to natural hazards. With recent changes in the climatic condition, Sikkim is more vulnerable to natural disasters, he said.

The Hon’ble Minister talked about construction of houses under the Housing Schemes for urban and rural areas which will be engineered to have natural disaster resilient features. Disaster resilient villages in 16 Model GPUs will also be built in the coming days. Furthermore, to deal with natural disasters, Sikkim will have its own Integrated Control Rooms and projects on Climate Funding and Climate Proofing.

The Hon’ble Minister thanked NDMA for continuous support to SSDMA. He expressed hope the stakeholders will take full advantage of information provided by the experts today. He assured the department that all assistance from the Government will be given to make Sikkim a disaster and climate resilient State.

Secretary, LR & DMD, Ms. Sarala Rai gave a brief history of SSDMA and how it came to being after the 2011 earthquake in Sikkim. A general report of activities and sensitization process by SSDMA was also given during her speech. She also thanked NDMA for continuously striving to make Sikkim a natural disaster resilient state.

Vice Chairman, SSDMA, Prof Vinod Sharma expressed his joy at seeing stakeholders at the meeting as this was an important subject in terms of the future of the region. He said that the recent climatic changes will lead to frequency of natural disasters in the State and the need of the hour is to build/modify infrastructures which are resilient to natural disasters.

Member, NDMA, Shri Kamal Kishore in his speech emphasized on changing infrastructure of the state to cope with disasters by using nature-based solutions. He highlighted the importance of making the State resilient to disasters not just for a few years but for decades to come as the menace of climate change looms on the horizon.

SEEDS, Co-Founder, Dr. Anshu Sharma stressed on the fact that we need to inculcate nature centric thinking in schools and village communities. In his PowerPoint presentation, he delved at length on various issues such as managing complex disasters in Sikkim, understanding local natural challenges of the State, need of Local Weather Advisory and Artificial Intelligence Humanitarian Assistance in predicting disasters.

Professor, Kelo University, Japan, Dr. Rajib Shaw, pointed out the fact that there was no sense of urgency towards climate change like the way it was for Covid-19 pandemic. He talked about having the same unity and urgency against climate change as we have against the Covid-19 pandemic as climate change is a greater threat against humanity. He further gave various recommendations to tackle challenges faced by Government and community at local level. Sikkim is on the right path by implementing measures which will successfully help the State in tackling natural disasters and climate change in the near future, he added. 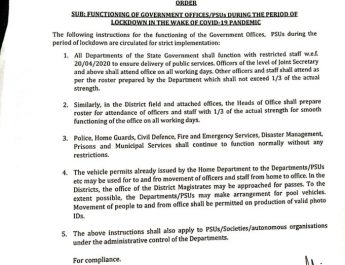 IMPORTANT ORDER FROM THE OFFICE OF THE CHIEF SECRETARY 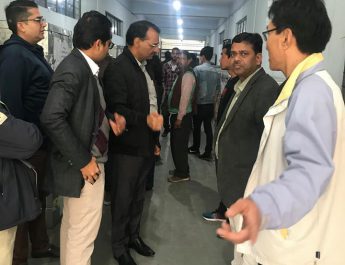 Team of officials of the Office of the CEO, Sikkim and the DEO, East Sikkim visited the Strong Rooms and the Counting Centers for the east district at Brihaspati Parsai Senior Secondary School 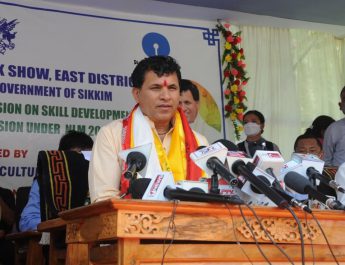 Minister of State for Agriculture addressed a press conference