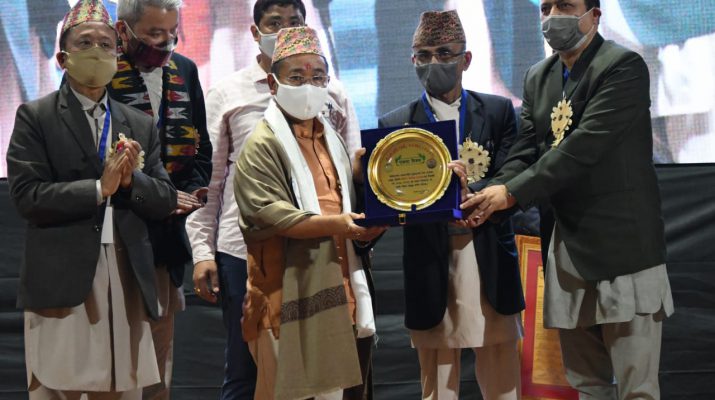 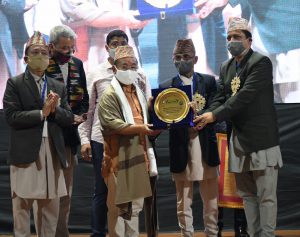 Gangtok, April 14 (IPR): Colourful cultural presentations, book release, felicitations and insightful discourses marked the Baisakhi Parwa 2021, here in the State capital, today. The procession of cultural troupes of various communities of Sikkim started from the Sikkim Legislative Assembly complex and assembled at Manan Bhawan. Hon’ble Chief Minister of Sikkim Shri Prem Singh Tamang also participated in the procession. He was joined by Hon’ble Deputy Speaker Shri Sangay Lepcha, Hon’ble Cabinet Ministers, Hon’ble MLAs, and other dignitaries.
At Manan Bhawan, the Hon’ble Chief Minister was accorded a warm welcome by the Celebration Committee. He then visited the stall where various traditional musical instruments, artefacts, and other traditional items were kept on display.
At the Manan Bhawan auditorium, the audience was greeted with a synchronized presentation by artists depicting the dance forms of various communities of Sikkim. The entire performance was choreographed by Ms. Komal Gurung, Director, Tapashree Dance Academy, Gangtok, while the music was provided by Shri. Manoj Rai, Director, Reeyaz Sangeetalaya. Subsequently, artists from local dance troupes performed the Bhutia, Lepcha and Nepali dance.
The Chief Minister launched a book titled “Sikkim Ka Bhasha: Dasha Evam Disha, edited by Dr. Tek Bahadur Chettri and published by Nepali Sahitya Parishad. This was followed by an Introductory Note on the Book by Dr. Samar Sinha, Professor, Sikkim University.
Hon’ble Chief Minister Shri Prem Singh Tamang in his address congratulated the Celebration Committee for bringing all the twenty-one communities of Sikkim on a single platform and showcasing the unity. He appreciated the idea behind celebrating the Baisakhi Festival as Ekta Diwas. He reiterated the commitment of the State Government to preserve, protect and develop the language, tradition and culture of all the communities of Sikkim.
The Chief Minister urged the audience, especially the students, to take pride in our unique identity, language and culture. He stressed the importance of preserving the language of each community by encouraging writers to publish in their own language. He requested Nepali Sahitya Parishad to facilitate the publication of such works and added that the Government would provide the necessary support.
The Chief Minister announced that the Government has already started the process of rectifying names of places that have been distorted over a period of time. He said that the original names of the places of Sikkim would be restored to preserve their cultural and historical significance.
He congratulated the Editor and the entire team behind the book – “Sikkim Ka Bhasa: Dasha Evam Disha”, which was released on the occasion. He also read out a poem from the book which emphasized the importance of preserving our language.
Speaking on the long-pending demand for tribal status to the twelve left out communities of Sikkim, the Chief Minister said that the State Government has left no stone unturned in its effort. He recalled the Government Resolution passed by the Sikkim Legislative Assembly on 11th January 2021, with regard to this. He further informed that he sent a communication about the Resolution to the Union Home Minister on 21st January 2021, for consideration. He expressed that the Government of India will consider the demand of the people of Sikkim.
The Chief Minister also emphasized the need to carry out an oral history exercise to gather valuable insights on our history and traditions. Further, he said that the traditional houses of all communities will be completed on priority. He also suggested that in educational institutions, students could wear their traditional dresses at least once a month.
Speaking on the current situation of Covid-19, the Chief Minister appealed to the people of Sikkim to abide by all the prescribed guidelines for their safety. He said that State is fully equipped to deal with the second wave of the pandemic. He appealed to everyone above 45 years of age to come forward and take the Covid Vaccine. He added that the vaccination programme (Tika Utsav) will continue in the State throughout the month of April at all the designated health centres. The Indoor Gymnasium Hall of Paljor Stadium will continue to cater to the people of Gangtok and surrounding areas, he added.
The Chief Minister referred to the address of Hon’ble Vice President of India recently in Gujarat where he had said that the people of Sikkim are beautiful as well as dutiful. In this context, he urged the Government employees of Sikkim to live up to this reputation and ensure punctuality at work.
In conclusion, the Hon’ble Chief Minister stated that the strength of Sikkim lies in its unity.
Earlier, the programme began with the welcome address by Vice President, Baisakhi Parwa Samaroh Samiti, Shri Hari Dhungyal. This was followed by the address of Dr. S.K. Rai President of the Celebration Committee, and address of Shri Rudra Poudyal, President, Nepali Sahitya Parishad. Both the speakers highlighted the importance of the festival and the idea of celebrating it as Ekta Diwas.
On the occasion, the Chief Minister presented Appreciation Certificates and Mementos to various organizations of Sikkim, and all the participating artists and individuals for their valuable contribution in making the programme a success. As a warm gesture of encouragement, the Hon’ble Chief Minister provided financial incentive to each of these organizations and individuals.
The Baisakhi Parwa Samaroh Samiti facilitated the Chief Minister for two years of exemplary governance, and for his commitment to maintaining unity and harmony among the people of Sikkim.
The programme concluded with the vote of thanks proposed by the Vice President of the Baisakhi Parwa Samaroh Samiti, Shri Raju Basnett. 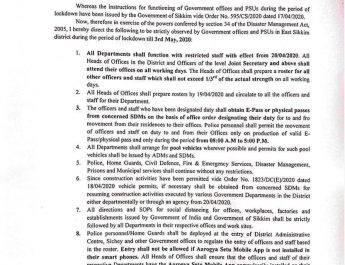 De-notification of the following containment areas under East District 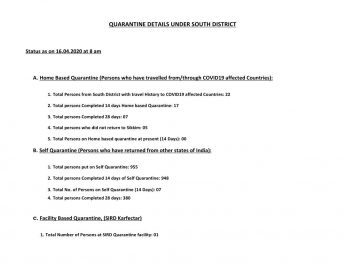