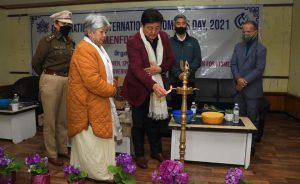 Mangan, 10th March (IPR): Sikkim State Commission for Women organized International Women’s Day at the conference hall of Zilla Bhawan, Mangan, today. Sponsored by National Commission for Women, Government of India, the event had Hon’ble Minister for Roads & Bridges and Cultural Affairs & Heritage Department, Shri. Samdup Lepcha as the chief guest. He was accompanied by Hon’ble Chairperson- Sikkim State Commission for Women Smt. Chung Kipu Lepcha, District Collector (North), Shri. Tenzing.T. Kaleon, Principal Director- Social Justice & Welfare Department Shri. Phuchung Bhutia and SP (North) Smt. Ongmu Bhutia. Members of Sikkim State Commission for Women, Officers and staff of the Social Justice & Welfare Department and students attended the event. The theme for the event was “Men For Women.” An initiative to recognize and appreciate men who work for the safety and welfare of women.
The chief guest began his address by wishing all the women a very happy International Women’s Day and expressed his delight and gratitude both for making him a part of a significant event. He said that women are the very core of one’s existence and that without them, there would be nothing to nurture the earth. He said that the qualities and traits of women are special and that men should be respectful towards them. He said that women have the ability to think and act and hence are decision makers right from their houses to their workplaces and beyond. He also spoke about the challenges faced by women throughout and said that Sikkim is blessed in a way that women here have more opportunities and advantages as compared to other states and regions. The government ensures high priority to women and provides them with security in all spheres. He informed that for the upcoming Municipal Elections, there are more seat reservations for women than men. He mentioned that even for a traditional affair like a marriage, most communities place gifts with utmost respect and love for the woman. He said that the North district should be proud of their female SP and look up to her as an example to be formidable, dutiful and responsible. He advised the students, particularly girl students to be cautious of sharing personal details on social media and warned them of the dangers and evil that lie on the web.
Smt. Chung Kipu Lepcha informed the gathering about how the celebration of International Women’s Day began in the early 1900s and its historic significance in uplifting and empowering women throughout the world. She spoke about how women’s roles have shaped and changed the political history of many countries and why women need greater attention and the importance of gender equality. She said that the Sikkim State Commission for Women helps in providing skill training to women so that they are capable of making a livelihood and living a dignified life. She urged the women to recognize their challenges and overcome them and asked everyone to reach out to Sikkim State Commission for Women, One Stop Centres and all institutes that cater to the needs and requirements of women.
Shri. Phuchung Bhutia spoke in detail about the various beneficial schemes for women under the Social Justice & Welfare Department. He highlighted some significant schemes and projects like One Stop Centres that provide integrated support and assistance to women affected by violence both in public and private spaces under one roof and to facilitate immediate, emergency and non-emergency assistance to a range of services including medical, legal, psychological and counseling support under one roof to fight against any forms of violence against women. He also spoke about Beti Bachao Beti Padhao, Swadhar Greh, Pradhan Mantri Ujjwala Yojana, Pradhan Mantri Matru Vandana Yojana, which cater to the girl child and women and provide service and security through counseling, training programs, shelter and rehabilitation, awareness program and many other services. He also spoke about the benefits and work done under Poshan Abhiyan, Poshan Vatika and Poshan Pakhwada that aims at improving the nutritional status of children, adolescents, pregnant women and lactating mothers.
Keeping the theme in mind, four individuals who have contributed towards the welfare and protection of women were felicitated. They were
1. Shri Raju Baman from Duars Express Mail, West Bengal for his selfless and courageous service in rescuing women and girl children who often get caught in human trafficking.
2. Shri. Karma Chewang Nima who runs an NGO called Freedom, which caters and rehabilitates women who suffer from substance abuse.
3. Shri. Nirmal Mangar, Senior Editor of Sikkim Chronicle for highlighting women-related news in the media and for also becoming the medium to connect distressed women to organizations.
4. Shri. Deoraj Rai President of Lungchok Kamarey GPU, South Sikkim for setting up a unique and innovative woman and child empowerment center in the GPU.
Shri. Minal Thapa from Netspeq Solutions provided a PPT on Sikkim Sahayog mobile app, which is available on Google Play Store for android users. He provided details on how the app functions and the services and contacts it provides. He also said that the iOs version for the app would be launched soon.
Shri. Raju Baman held a short interactive counseling session with the students, where he advised them to be smart in dealing with online predators who target young children and manipulate them into making wrong decisions. 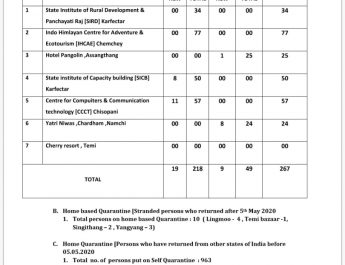 Quarantine details under South District as on 14.5.2020 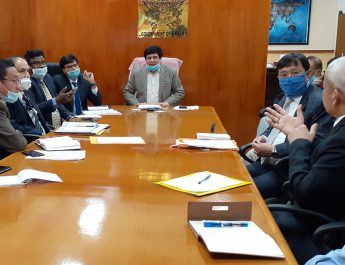 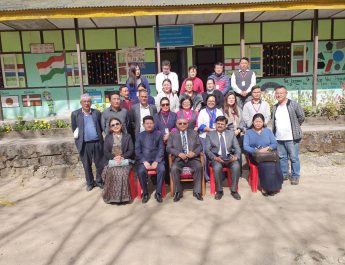