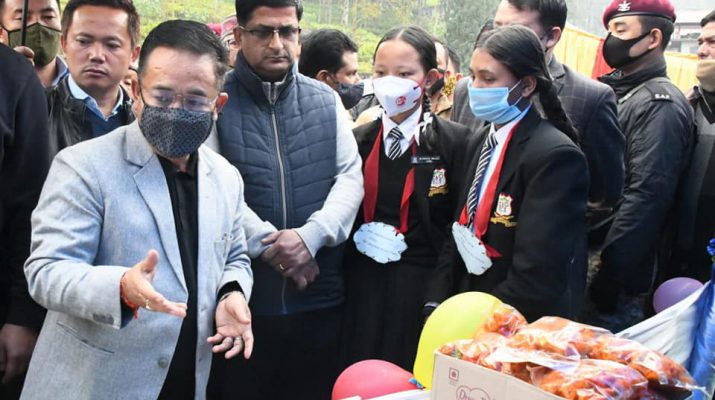 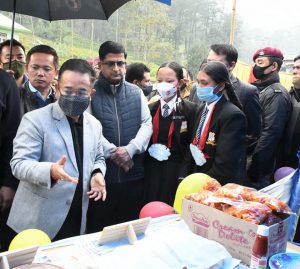 Hon’ble Chief Minister of Sikkim, Shri Prem Singh Tamang visited the stalls of Atma Nirbhar Sikkim which were installed by the students of Hee Yangthang Senior Secondary School near Hee Bazar, West Sikkim. HCM interacted with the students and during the interaction, he stated that we must be ready to tackle the strenuous situation which may prevail after graduating if remained out of business and try to be productive and self-reliant. He reiterated that entrepreneurship is the best option for the educated youth who may not be able to get any job despite several attempts, he added.
HCM also informed about several schemes initiated by the government for the welfare of the common people and encouraged everyone not to hesitate to opt for any entrepreneurship for their livelihood. The programme was organised by the students under the guidance of the Principal and staffs of the school. It is also to mention here that, under the direction and guidelines of District Administration West and Nehru Yuva Kendra, a 3 days’ programme of Atma Nirbhar Sikkim was initiated at Hee Bazar, West Sikkim, today.
This programme depicts the concept of self-reliance for educated unemployed youth, which could be applied after graduating. To empower the youth to stand with their own efforts through Atma Nirbhar Sikkim, this kind of programme acts as a bridge and agent to train the budding entrepreneurs enabling them to engage themselves after the completion of their studies. Several food items were prepared and displayed by the student entrepreneurs for presentation and practical purpose.
Dignitaries present on the occasion were Hon’ble Minister, Shri L. N. Sharma, MLA Shri K. S. Lepcha, Political Secretary to HCM, Shri Jacob Khaling, Advisor GOS, Shri Birendra Tamling, Chairman GOS, Shri JB Limboo, SP West Shri T W Bhutia, SDM Dentam, Principal Hee Yangthang Sr. Sec. School, SDPO Gayzing, BDO Dentam alongside Panchayat and several local gentries.
Press Release from IO to CMO. 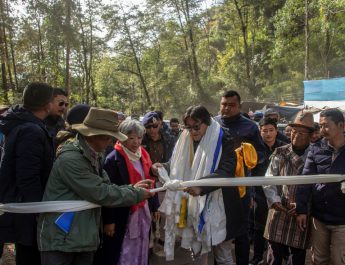