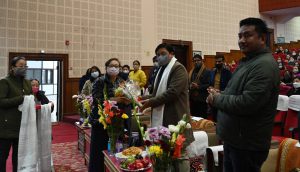 Gangtok, Feb 25th: The Culture Department, Government of Sikkim, organized a programme for the distribution of Sound Systems to various social organizations and Institutions. The programme was attended by Shri Samdup Lepcha, Hon’ble Minister for Roads and Bridges and Culture Department as the Chief Guest and Shri Sonam Sherpa, Chairman, Sikkim Culture, Heritage and Communal Harmony Board along with the Secretary, officers and staff of Culture Department. The programme was also attended by some of the beneficiaries who were handed over tokens by the Chief Guest.
Shri Sonam Sherpa, Chairman, Sikkim Culture, Heritage and Communal Harmony Board who led the Sikkim contingent for the Sikkim Utsav organized by North East Zone Cultural Centre, Kolkata w.e.f. 12th February to 14th February 2021, was felicitated at the programme. Similarly, Shri L.N. Sharma Preservation Officer and Shri Yangchok Lachenpa, troupe leader of the Sikkim Contingent for the Tableau at the Republic Day Parade 2021 at New Delhi were felicitated. The Manan Hall attendants, who are the driving force behind the upkeep and maintenance of the Hall, were also felicitated at the event.
The Hon’ble Minister in his address apprised the gathering on the various initiatives undertaken by the State Government for the preservation and propagation of the Culture and Heritage of the different ethnic communities of the State. He further reiterated that culture is what society is made of. The culture of a society is reflected in its language, folk tales, music, literature etc, which is an integral part of our everyday life. He further appealed not to make any individual applications for the issue of the sound system but only those coming from registered organizations would be entertained. He lauded the efforts of the artistes and the troupe leaders for presenting a befitting performance that highlighted the social and cultural aspect of Sikkim in the national arena.
Earlier, the welcome address was proposed by Secretary, Culture Department Smt. Sherap Shenga.

Order from the office of DC East regarding containment zone for Sun Pharma Ltd. Unit-I 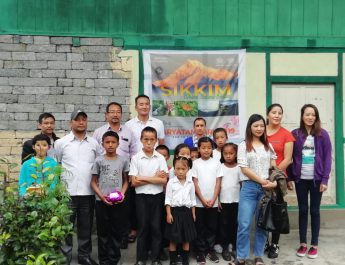 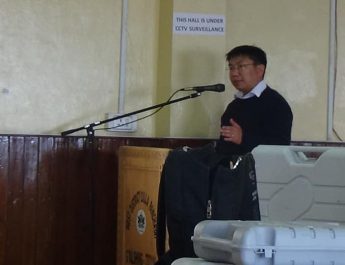 Training for the Dispatching, Receiving and Commissioning Team’ successfully concluded in West Sikkim