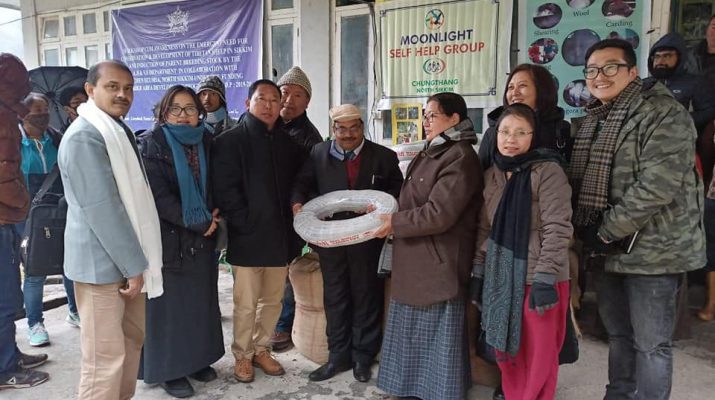 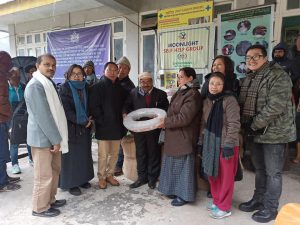 8th Feb, Mangan: A workshop on Value Added Products from Angora Rabbit and Sheep Based towards doubling the farmers’ income was organized by ICAR-NINFET (National Institute of Natural Fibre Engineering Technology) in collaboration with KVK, South Sikkim and Department of AH&V.S, North District. The programme was graced by Dr. Dinesh Babu Shakhawat, Director, NINFET, Dr. Sanjay Debnath, Principal Scientist, NINFET, Dr. Karma Tenzing Bhutia, Additional Director, AH&VS, North, Dr. Dechen O Kaleon, Joint Director, AH&VS, North; Dr. Hissay Doma Lepcha, Deputy Director, AH&VS, North, Dr. Chewang Norbu Bhutia, SMS, KVK, South Sikkim, Mr. Passang Bhutia, Livestock Inspector, Angora Farm, Rabum, Mrs. Doma Lepcha, SHG President, North District, Farmers, SHG groups and staff.
The main objective of the programme was to create awareness among the Angora, Sheep breeders/farmers regarding the quality of the fibre proven scientifically by NINFET, thus making them aware that such high-quality fibre is in their possession, which has a great potential in the national and international markets. Dr. Karma Tenzing focused on the importance of Angora Rabbit, Tibetan Sheep, Yak for the highlanders of Sikkim and the impact that they can have on their economic status. Further, the also stated that the department has always extended their full support.
Dr. Sanjay Debnath provided a presentation regarding the properties of Angora wool/fibre of Sikkim origin, which was analyzed at NINFET and it proved to be of superior quality, having immense potential.
Further Sikkim Angora and Viscose fibre were used to produce a blended yarn, which can be used to produce high-quality products in the future.
Dr. Shakhawat mentioned that full technological support would be provided from NINFET to develop the products and improve the economic sustainability of the farmers. An interactive session was held with the farmers. Later the farmers were provided with arm equipment, galvanized wire for a cage, poly pipes, feed and medicines.
Further MOU has been signed between NINFET and KVK, South Sikkim for 5 years, wherein there would be a transfer of technology to the farmers and development of the Angora, Sheep, Yak wool products.
The programme concluded with a note that superior quality products from the Highlands of Sikkim would be of focus, which would put Sikkim’s Angora, Sheep and Yak Products on the national and world map.
(Press Release received from Animal Husbandry Livestock, Fisheries & Veterinary Services Department, Govt. of Sikkim) 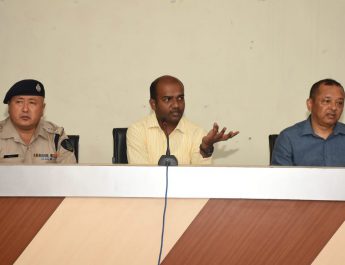