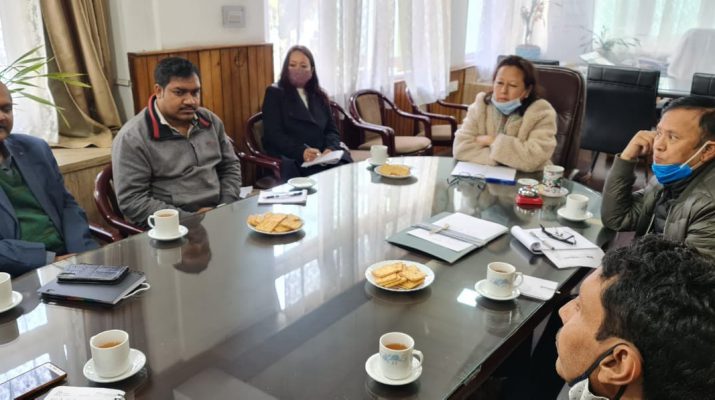 Gangtok 3rd February 2021: A meeting regarding the beautification of all the Urban and Rural Bazaars of Sikkim by removing all aerial connectivity lines was held in the chamber of Secretary, Urban Development Department, with all the Telecom Service Providers operating in the State. Present in the meeting were Secretary, UDD, GM, BSNL, Gangtok, Network Engineer Vodafone, AGM BSNL, SCO Reliance Jio. Jio Center Manager, Additional Chief Engineer Smart City Gangtok, MD SBM Chief Engineer UDD Joint Secretary, UDD.
Secretary, UDD apprised the house that since Sikkim is a Tourist Destination State, many tourist flocks to the State to enjoy its scenic beauty but this has over time been marred by the overhead utility lines which can be seen all over the Bazaars of the State Now since Smart City is to construct a 12Km duct from Vajra to Ranipool, the Secretary cum State Mission Director, Smart City, requested all these private companies to utilize this duct to the fullest which will help in removing the aerial connectivity which is currently marring the beauty of the place. She also asked the house for suggestions to be taken up by the Department to overcome the constraints towards the beautification of the Bazaars areas of the State including Class – II & Class – III Bazaars.
Shri D. Chakraborty, Jio, Center Manager said that the Company would be glad to lay down the underground cables provided permission is granted for the same. The constraints faced were also discussed at length. One of the main bottlenecks proved to be the numerous utility lines running underground which makes it almost impossible to dig the duct for laying the underground fibers. Also, the backbone for laying the fiber optics is already there along the National Highway but there is no road crossing that is required to connect the households in the interiors. In order to cross the cables in the interiors, permission is to be sort from the National Highway and Infrastructure Development Corporation Limited (NHIDCL). Also, because of the constraint of funds, many of these old & ugly cables have not been replaced over a period of time.
The Chief Engineer, UDD, apprised the house that BSNL has defunct poles at Soreng Bazaar which is hampering the beauty of the place so if permitted this could be removed to the GM.BSNL consented.
The Representatives from Jio also requested to enable them to give in their inputs/submission so that all aspects could be looked into.
The Secretary suggested that a Joint Inspection will be undertaken together with the Telecom Service Providers and the Smart City Engineers so that the exact areas for laying of the cables/crossings can be identified and all modalities can be adhered to.
Also, it was remarked by all those present that the National Highways and Infrastructure Development Corporation Limited (NHIDCL) has kept no provision for crossing the Highway by ducts which have to be addressed for which it is pertinent to have the members of NHIDCL attend the next meeting.
The Telecom Service Providers have also asked that the process for obtaining permission to get the tower erected may be looked into as it involves a very long process so that it would be easier to maintain connectivity in the State. The Secretary also asked the house for any suggestion or any corrective measures to be undertaken by the Department to facilitate the removal of aerial connectivity which is at present running all over the State.
All the Representatives agreed to the suggestions and expressed their gratitude for providing this much needed coordination meeting with the Department and also for providing the duct which would make it convenient in removing these overhead utility lines to a great extent.

For information to all

Following premises have been declared as containment zone under South District 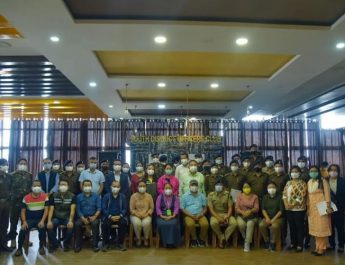 A Day For Mother Earth at Namchi