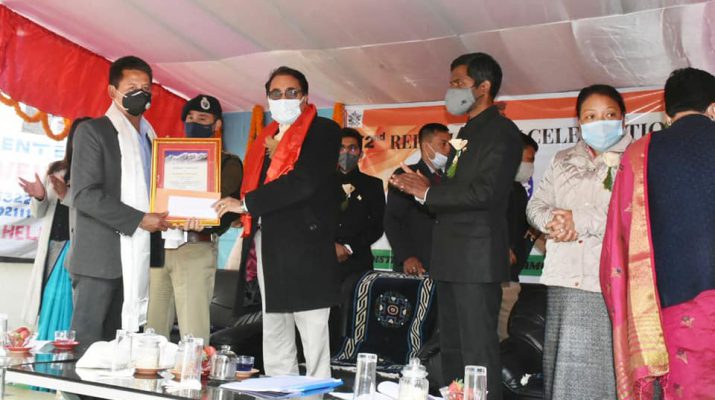 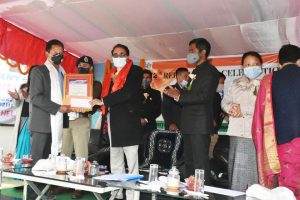 Namchi, 26th January (IPR): The 72nd Republic Day was celebrated at the premises of District Administrative Centre, today. The Chief Guest for the occasion was Hon’ble Minister for Tourism and Civil Aviation Shri B. S. Panth, he was accompanied by D.C. (South) Shri M. Bharani Kumar, S.P (South) Shri Thakur Thapa, SDM (HQ) Shri Chiran Rizal, SDM (Namchi) Shri Agawane Rohan, Zilla Adhyaksha ( South) Smt. Tshering Dem Bhutia, Additional Political Secretary Smt. Anjeeta Rajalim along with other HoDs and officials from the District.
At the onset of the program, Chief Guest was accorded with the Guard of Honour followed by unfurling of the tricolour and singing of National Anthem. Afterwhich, Republic Day message of the Hon’ble Governor and Hon’ble Chief Minister was read out by D.C. Shri M. Bharani Kumar and SDM (HQ) Shri Chiran Rizal, respectively.
Addressing the gathering Shri. B.S. Panth extended his warm wishes on the 72nd Republic Day. He highlighted the importance of Republic Day of our country and spoke in-depth about its historical background. He emphasized on the fact that every year 26th January is celebrated to commemorate the Indian Constitution across India with a lot of fervour. He said that the public should immensely value and respect the constitutional rights provided by the constitution of our country. He also attributed the sacrifices made by Mahatma Gandhi and other freedom fighters due to which the citizens are living in a free country and added that one and all must protect their rights and freedom.
To, commend the hard work put up by the frontline COVID-19 warriors during the time of pandemic the DAC, South felicitated various teams and individuals. They are the Best Three Anganwadi workers (SJW&ED), Best Three Asha Workers (H&FWD), Safai Karamcharis (Namchi District Hospital), (NMC)and (NJMP), Head Warden (District Prison), Two personnel of Sikkim Police (South), NGOs ( NYK) and Voice (Namchi). They were all presented with a certificate of appreciation by the Chief Guest.
Further, the programme also witnessed the felicitation presented to the Best Employee for their commendable work to Shri Y.P. Sharma ( Livestock and Farm Caretaker, Goat Farm, Rateypani) and Shri Buddha Singh Tamang ( Animal/ Dairy Inteminator, Veterinary Dispensary, Sadam).
Felicitation was also accorded to the first three winners of AATMA NIRBHAR SIKKIM. In this category, the first prize was bagged by Namchi Girls Senior Secondary school followed by Temi Senior Secondary school in the second position. Likewise, the third position was given to two schools which are NTL Wok and Jorethang Senior Secondary school, respectively.
Felicitation was also presented to the winner and runners-up of Cyclathon organised by Sports Department, South District under the theme ” Fitness Ka Dose Aadha Ghanta Roz”. 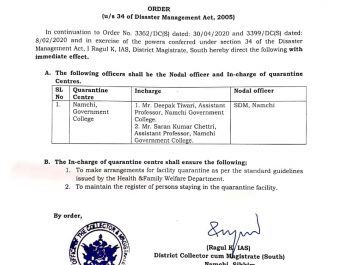 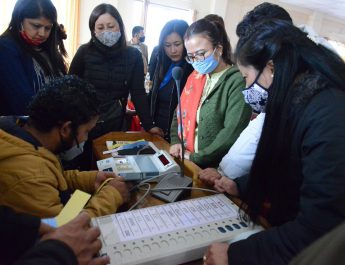 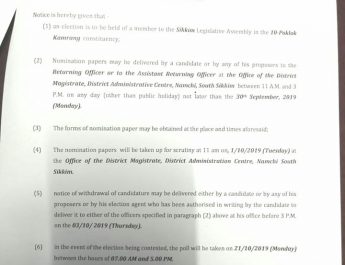