Gyalshing, 12th January 2021(IPR): A programme on ‘National Youth Day’ was held today at Dentam Senior Secondary School with the motto ‘Vitalise with the energy and push the limits by channeling youth power’. The Hon’ble Member of Parliament (Lok Sabha), Shri Indra Hang Subba graced the event as the Chief Guest. The programme also had the presence of DC West, Shri Karma R.Bonpo( IAS),
Political Secretary to HCM Shri Madhu Sudan Sharma; ADC, Development; SDM Dentam; BDO Dentam; PS Incharge, Dentam, Principals from Heegoan and Dentam Senior Secondary School; Teaching faculties; Students and others.
The Chief Guest, in his address, informed about the importance of youth in nation building process and drew lights on the significance of the day celebrated as the birth anniversary of Swami Vivekananda, whose thoughts, ideas and contributions made towards the nation are learned and respected by marking the day for youths.
He encouraged all for adhering to the teachings of Vivekananda in favour of the nation building process and advice for working for the betterment of the society with a selfless contribution.
He then informed about the Hon’ble Chief Minister’s envision of outreaching in the field of the Health and Education sector and informed about various initiatives of the State Government in favour of the betterment of the people of the state.
He also offered his condolences upon the untimely departure of Ms. Ria Lepcha, an eminent personality in sports scenario of Sikkim.
The District Collector, addressing the gathering, urged for the proper adherence of the Covid-19 SOP’s. Informing about the tentative possibility of India being the vaccine hub for the world and resulting in a surge of the pharmaceutical and chemical sector, he encouraged the students to work hard and subsequently suggested grabbing every possible opportunity that emerges. He urged the students not to limit their subject-related materials to its academic streamline rather encouraged them to do further research upon it and enlarge the horizon of the knowledge. He also encouraged the students extensively through the motivational instances.
Shri Bonpo also informed about the State Government and HCM’s vision of transforming and uplifting the education sector of the State through proper implementation of Smart Class or Virtual Class, Science lab with all the facilities with an aim to quality education.
Amidst the programme, the dignitaries also paid their visit to Science Lab, Information Technology Lab and also witnessed the ongoing Smart Class Solution. Similarly, Painting Competition was also organised with the theme ‘Channeling The Youth Power For Nation Building’, in which Master Lakpa Temba Sherpa of Dentam Senior Secondary School stood First; Master Ayush Limboo of Hee-Yangthang School stood Second and Miss Geeta Chettri of Government Senior Secondary School, Uttarey secured the third position. 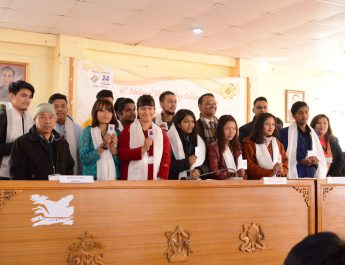 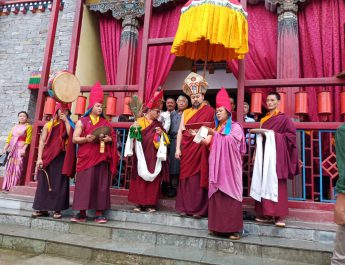