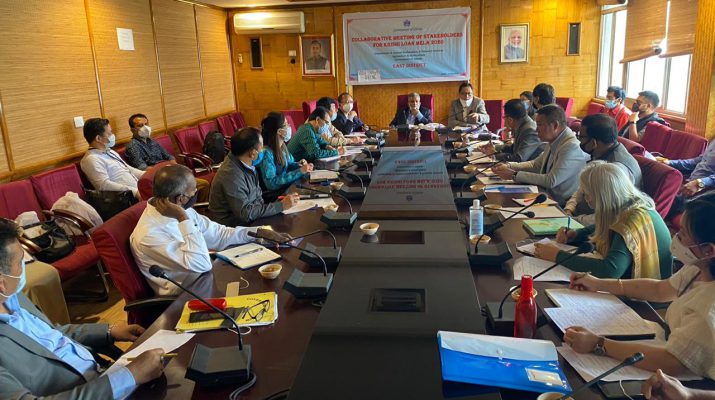 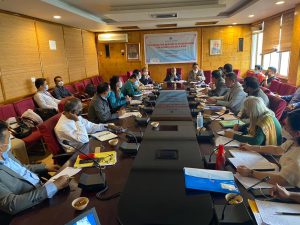 Gangtok, September 17(IPR): The collaborative meeting of stakeholders for Krishi Loan Mela 2020 was held at the conference hall of Krishi Bhawan today. The meeting organized by Animal Husbandry and Veterinary Services, Agriculture and Horticulture Departments was chaired by ACS cum Agriculture Production Commissioner, Shri A. K. Yadav.
The meeting also had the presence of Secretary, Agriculture Department, Shri Rinzing Chewang, Secretary, Horticulture, Shri M.T. Sherpa, ADC HQ, Shri Milan Subba, CEO, Sikkim Organic Farming Development Agency (SOFDA) Dr S. Anbalagan, Credit Linkage Facilitator(Consultant) Shri Pradeep Bhandari, Chief Manager Lead Bank Shri Gopal Lama, AGM, RBI Gangtok, Shri I.Y.T Namcho, M.D. SISCO Bank, Smt P. Chozam, Additional Director AH and VS Shri T.B. Ghatani, Joint General Manager, Sikkim Milk, Smt K. D. Barfungpa, along with the representatives from various private and Nationalised Banks, members of K.C.C committee officials and staff of the Departments.
The meeting was held with an aim to facilitate Krishi Loan to the farmers under East District in order to strengthen the rural economy through the agriculture, horticulture and animal husbandry sector in the State. In his keynote address, ACS cum APC, Shri A.K. Yadav mentioned that it was a welcome step by the banks to extend the credit to the farmers. He added that the scheme will go a long way in doubling the farmer’s income. He further mentioned that Sikkim is famous for large cardamom, ginger and oranges and added that these are the strength of the state which must be capitalized and worked upon.
He said that appropriate forums and competent authority will take note of the operational bottlenecks and resolve the problems apprised during the meeting. He further urged the stakeholders to take a holistic view and approach to make this scheme a success. He also thanked all the private banks operating in Sikkim for providing loans to the farmers in enhancing the rural economy.
In his address Secretary, Agriculture Department, Shri Rinzing Chewang urged the stakeholders to educate and sensitize the farmers before disbursing the loans. He added that viability should be ascertained before sanctioning of loans and said that the concept of schemes should be properly understood by the farmers before availing the loans. He mentioned that the Nodal Officers should be specific to the farmers regarding the repayment of loans to the banks so that the farmers don’t have to suffer in the long run.
Secretary Horticulture Department in his address mentioned that the applicants should be properly informed and sensitized regarding the scheme to make informed decisions. He further added that besides this particular scheme, the banks should also categorically inform and guide the applicants accordingly regarding other ongoing schemes as well.
Earlier, Credit Linkage Facilitator (Consultant), Shri Pradeep Bhandari highlighted the various activities undertaken under the scheme. He mentioned that this scheme was launched on 28th August 2020 from West District under the direction of Hon’ble Chief Minister. He added that major steps have been taken by the Government to support the farmers and their overall improvement.
During the meeting, Chief Manager Lead Bank Shri Gopal Lama spoke on the mobilization of credit to the farmers. He suggested for proper coordination between the Banks and the State Government. AGM, RBI, Shri I.Y.T Namcho spoke on streamlining the loan process. He pointed out that counseling should be provided to the farmers regarding crop insurance though it was optional. He further said that there should be proper streamlining in the distributions of forms and specifically mentioned that bankers should verify eligible applicants to recover their loans within a stipulated time period.
Similarly, M.D. SISCO Bank, Smt P. Chozam highlighted on Kishan Credit Card and Dairy Entrepreneurship Development Scheme (D.E.D.S) and also spoke on benefits being availed by the beneficiaries so far.
Shri T.B. Ghatani highlighted on the preliminary planning, preparedness and execution to avoid upcoming challenges under the Krishi Loan Scheme.
Joint General Manager, Sikkim Milk, Smt K.D. Barfungpa during the meeting highlighted the marketing linkages of milk in the State and added that there has been an increase in milk production through the KCC scheme.
The meeting was followed by an open house discussion which featured various queries, suggestions and inputs put forth by the stakeholders regarding the scheme. 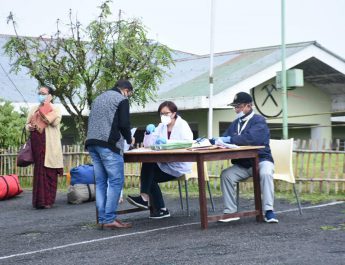