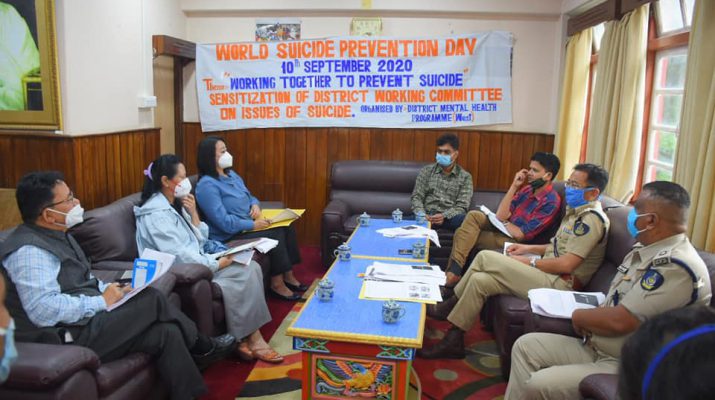 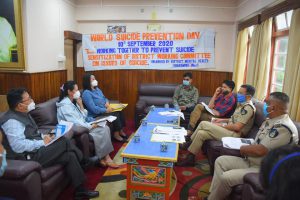 Gyalshing, 11th September 2020 (IPR): World suicide prevention day is celebrated across the globe every year on September 10 since 2003 to raise awareness about suicide and its prevention. A meeting regarding the same was held today at the chamber of DC West, on the theme “Working Together to Prevent Suicide”. On this very day of the Prevention and Control of Suicide in Sikkim, District Level Working Group Committee was also formed under the chairmanship of DC West, Karma R. Bonpo. The meeting had the presence of Tushar Nikhare, ADC, West; Tashi Wangyal, SP, West; Anant Jain, SDM, HQ; P.L. Subba, Deputy Director, Education Department; Dr. Anusha Lama, CMO, West and Dr. Kunzang Ongmoo, District Nodal Officer/District Mental Health Programme.
ADC West highlighted healthy suggestions for prevention. He mentioned that every individual of the society must take responsibility to save the life of people committing suicide. Identifying the behavioural tendency of the individual at high risk is important. He also stated that communities and organisations have an extremely important role in developing preventive services and programs. He also asked teachers for organising programs in schools and colleges which can reduce the rate of suicide and promote healthy mental activities. Teachers can help young children during their tender age to provide proper support and identify and understand the children’s’ problem at an early stage and counsel them accordingly.
Dr. Kunzang Ongmoo highlighted the causes and the different level of prevention of suicide. She also mentioned that they have trained some people to create awareness among people. She also stated that counselling is the must to prevent suicide and creating awareness programs as well.
The meeting was successfully concluded at 5 pm. 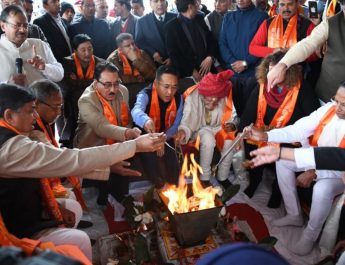 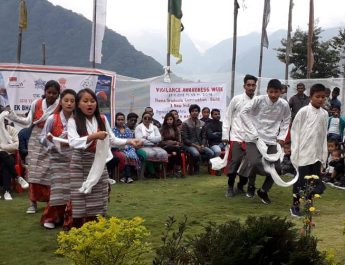