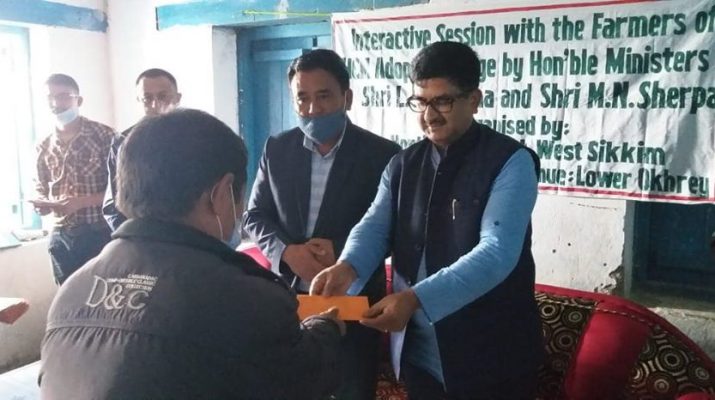 Gyalshing, 22nd June,2020 (IPR): A special interactive session with the farmers and distribution of farming inputs and tools, held at Lower Okhrey, an adopted village by the Hon’ble Chief Minister of Sikkim, West Sikkim, today.

Minister Sharma, in his address, urged all beneficiaries to make optimum utilisation of the farming inputs and agricultural tools to multiply productions and income to be self-reliant for sustainable growth and development of the locality.

He encouraged participants to Vocalize the Local produce including all cash crops and vegetables so that the farmers become self-reliant and socially & economically upgraded.

Minister Sharma informed that the Hon’ble Chief Minister of Sikkim has given special priority for uplifting the deprived farmers, pragmatically, after the formation of the state government.

Elucidating the tremendous supporting initiatives taken up in dairy farming, Minister Sharma stated that the government, under the leadership of the Chief Minister Shri P.S. Tamang, has given financial incentives of Rupees eight per litre of milk, after increasing its minimum price to Rs 32, thereby increasing the price per litre of Milk to Rupees Forty. He also urged farmers to be associated with Sikkim Milk Union as a member and elaborated benefits of taking membership. He also informed that the state government will establish a Mini Processing Unit at Dodak West Sikkim and a Mini plant at Nesa/Tashiding.

Highlighting the historic achievement of Farmers Producers Organization (FPOs), Minister Sharma informed that the state government has successfully handed over the much-awaited equity grant to all twenty-eight FPOs of the state and encouraged farmers to take membership of their respective FPOs.
Minister Sharma articulated on the overview of the newly formulated strategic planning of the State Government with the bankers and drew lights on the provisions of the subsidised loan to be availed to the aspiring and progressive farmers in the state. Further, he urged the youths to take benefits of KCC loan of Rupees One Lakh Sixty Thousand and up to credit loan of Rupees Ten Lakhs for Self Help Groups without collateral to begin a new venture in the lucrative profession of farming. He reiterated on the imperative need for utilisation of uncultivated barren land to meet up increasing demands of agricultural produce. Minister Sharma, in his concluding remarks, underlined the transparency and accountability maintained by the state government.

Addressing the gathering, Minister Sherpa, expressed gratitude to the Hon’ble Chief Minister for adopting a village in his constituency and spoke on the purpose of the interactive and token distribution programme. He anticipated that the most deprived society of Lower Okhrey shall witness notable progress and reformation in near future and subsequently, the other Gram Panchayat Units in the constituency will also be given priority in the developmental process, he added. Minister Sherpa also informed on the departmental activities, field inspection, planning and its state of progress in brief. 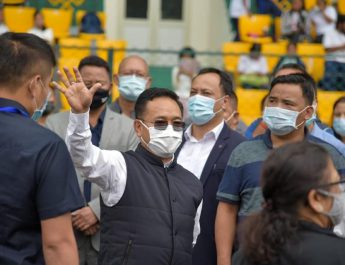 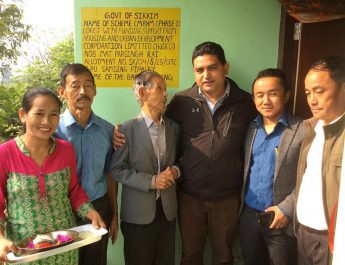