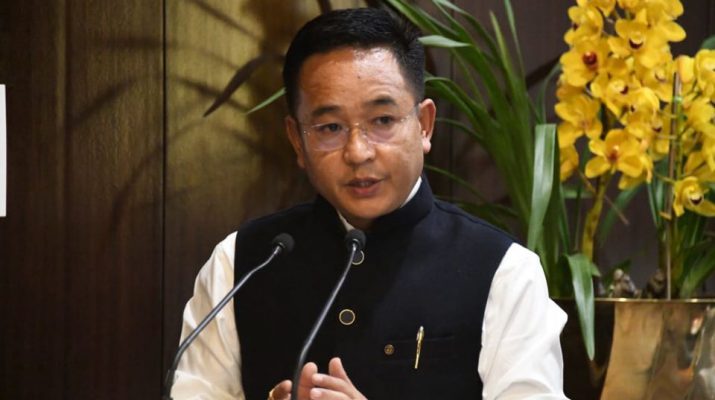 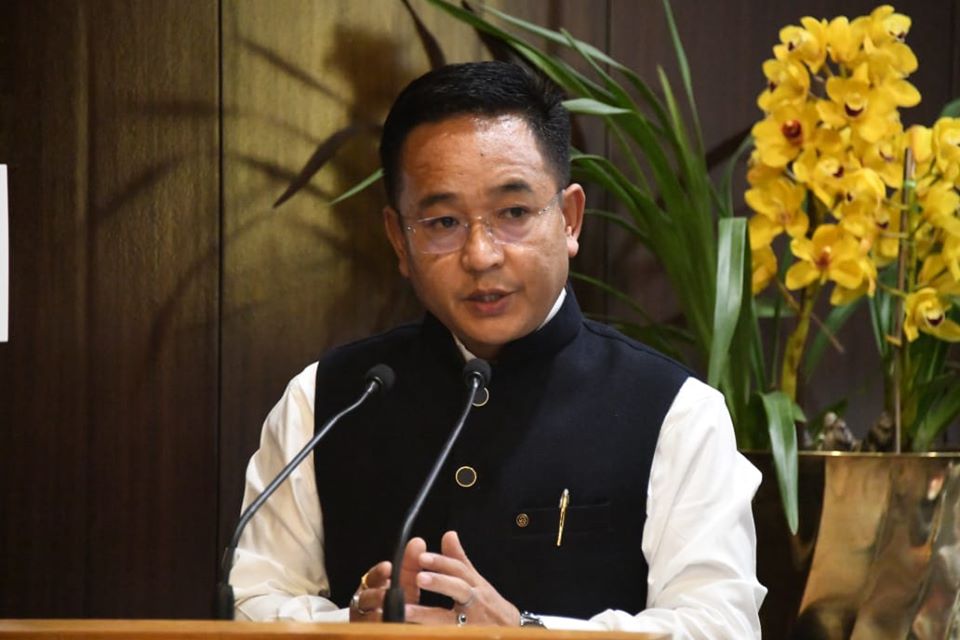 Gangtok, March 16: (IPR) Chief Minister Shri Prem Singh Tamang (Golay) today chaired a high-level meeting of all Cabinet Ministers, MLAs, State Administration led by the Chief Secretary, and various stakeholders of the hospitality sector to deliberate on immediate measures to be taken by the State to prevent the outbreak of Novel Corona Virus (COVID 19) in the State of Sikkim.

It may be mentioned that the State of Sikkim has not reported a single case of COVID 19 till date, and the Government is taking all possible measures to prevent any outbreak.

At the outset, Chief Secretary, Government of Sikkim, Shri S.C Gupta gave an overview of the current situation, how the Government of Sikkim is managing the situation, and further steps needed to be taken to handle it effectively. He stressed that the rate at which the virus is spreading exponentially, there is no room for any complacency. He, however, maintained that there is no need for any panic either.
The Chief Secretary explained in detail the initiatives being taken by the Government at various levels, starting with the screening of visitors and commuters from the State borders.
He stressed on the need for community surveillance, responsible use of social media, medical training and preparedness of medical staff deputed.
He said that the quarantine wards at old STNM, New STNM, CRH, Ayush Hospital Geyzing, Namchi District Hospital, Army Hospital, seem adequate for the time being. He, however, proposed to convert Government establishments in the outskirts or slightly isolated places into isolation wards to cater to a larger population.
He further said that in order to check contamination within a territory, several countries and states have called for temporary shut down of institutions etc. Keeping this in consideration, he proposed for closing down of educational institutions for a certain time. Likewise, we could put a temporary ban or embargo on the entry of any tourist or visitor to the State in the public interest, he added.
He suggested for shut down of Gyms, Cinema Halls, other public gatherings, government meetings, melas or religious congregations.
All District Collectors are adequately equipped to issue necessary orders, he added. He added that SDRF funds can be used for the procurement of essential commodities and equipment.

Principal Secretary, Health, Shri K. Srinivasulu, briefed about the state of preparedness and measures being taken to contain the situation. He stressed that since COVID 19 has been declared as a global pandemic, there is no other option but to contain and exercise self-quarantine. He also appealed to the people to exercise hygienic practices, especially in poultry farms and slaughterhouses.

DG-cum-Secretary, Health, Dr. P.T Bhutia in his address briefed about the current status of initiatives being taken by the State Health Department. He reiterated that this is a pandemic, and support and cooperation are solicited from all departments and concerned stakeholders to contain the situation. Speaking about the screening process, he said that we need additional manpower from NGOs. He informed that Civil Defence is already in place. He informed that the Urban PHC (Old STNM) has been designated as quarantine ward, and has adequate space. However, he requested the SDRF to take over the place and seal it so that any thoroughfare is avoided. He informed that the State Health Department is technically prepared. He submitted the unavailability of sample testing facility in Sikkim, thus causing a delay in confirming the test reports. He stressed that social distancing is the key for the time being. He requested for some mobilization fund for the health staff and officers to carry out the work effectively.

Additional Chief Secretary, Tourism Department, Dr. K. Jayakumar, stated that the preparedness in place and future plans for containment is fully justified considering the exponential spread of the virus globally. He proposed for some moratorium in loans being taken by individuals from the hospitality sector to compensate for the economic distress they would be facing.
Supplementing on the points discussed earlier, Dr. Jayakumar said that there should be strict enforcement of any measures in place such as screening, shut down and self-quarantine. He also stressed on the need for extensive awareness at the community level through various modes apart from social media. He stressed on the need for Quarantine enforcement team, home and community caregivers, screening team, control centre, reporting/notification of symptoms, advocacy, educating stakeholders like drivers and service sector people, hospital care, ventilator and ICUs, and temperature measuring machines.
He shared a five-point strategy of strict enforcement- Detection, Contact tracing, intensive medical care, supplies & disposals, and control room with the designated team.

This was followed by an open house discussion which was participated by officers and stakeholders.
Stakeholders like TAAS, SAATO, SHRA and Driver Associations expressed their support to the decision taken by the Government. They also expressed their readiness to contribute manpower as volunteers at various screening points. They also announced that they would contribute at least two number of thermal screening equipment to the Health Department. They urged the Government to ensure that all infrastructure should be established within the period of shut down so that once the situation comes to normalcy, tourists and visitors should not feel apprehensive about travelling to Sikkim. They unanimously welcomed the Government’s decision to intensify the process for the overall safety of the people of Sikkim and assured their full support at various stages.
Officers of the State Government also participated in the discussion and made their submissions.

Political Secretary to the Chief Minister Shri Jacob Khaling shared some of the suggestions put forth by the people of Sikkim through various media.
He suggested for the constitution of a State Task Force to monitor the situation on a daily basis.

MLA, Martam Rumtek, Shri Sonam Venchungpa, made some suggestions to ease the process of screening. He also suggested the Tourism Department and stakeholders come up with effective communication strategies to manage the situation so that the brand value of Sikkim is intact.

Additional Chief Secretary, Finance & Planning, Shri V.B Pathak informed that an amount of Rs. 55 lakhs has been contributed by the Future Gaming Group and its MD Shri S. Martin towards the Chief Minister’s Relief Fund. He handed over the cheque to the Chief Minister.
Shri Pathak also urged the Health Department to expedite the construction of the 100 bedded Infectious Disease Ward at new STNM Hospital which is nearing completion.

Chief Secretary, Shri S.C. Gupta summed up the open house discussion wherein he called for considering legal aspects while taking a decision on shut down of educational institutions and other bodies.

After the thorough deliberations, Chief Minister Shri Prem Singh Tamang made the following announcements of the State Government to deal with the current situation impacted by COVID 19. These decisions are being made in the public interest which is inevitable at this point of time, he said. He appealed to the people of Sikkim to take these decisions positively because nothing is more important than public health and life. He said that Sikkim is fortunate to not have a single case of Corona Virus, but we should take all possible precautionary measures:

1. The State Government will notify a complete ban on entry of domestic tourists to Sikkim till 15th April 2020, subject to improvement in the situation. This will be notified tomorrow, he informed. He added that the Government will review the situation from time to time, and if it does not improve, the shut down could be extended.
He also appealed to the people of Sikkim to avoid any travel outside the State, unless it is an emergency and unavoidable.
He also advised the people of Sikkim to avoid travelling to Darjeeling, Kurseong and Kalimpong and discourage family and relatives from these places from visiting Sikkim.

2. All public places such as Cinema Halls, Casinos, Pubs and Disco, Gyms, hotels, Mela and festivals, schools, colleges and universities will be closed till 15th April 2020. He added that all the students should stay in Sikkim and refrain from travelling outside the State, even if it means not travelling to their home states.

4. Tourism Guest House at Rangpo will be converted into a quarantine ward.
The Chief Minister directed for similar arrangements to be made in Melli.

5. The government will procure testing and all required equipment. Police and Health Department were directed to go all out to carry out the work.

6. SICB Centre in Karfectar, South Sikkim will be converted into a quarantine/isolation unit. Similarly, the Government will take up other suitable Government establishments if the need arises.

8. Pharmaceutical companies and other industrial units will also be requested to shut down, in the public interest. The Chief Minister directed the Commerce & Industries Department to take necessary action.

9. Health Department to procure emergency medicines to avoid any shortage in future.

10. All essential and food commodities to be stored by the concerned Department immediately to avoid any shortage in future.

11. A complete ban on entry of labourers into the State till the situation normalizes. The Chief Minister maintained that those labourers who are already in the State should be advised not to travel out of the State.

12. Government orders will be issued for all the above decisions made.

In conclusion, the Chief Minister appealed to the people of Sikkim to support the decision of the Government. He said that life and health of people of Sikkim come above all else, and urged to everyone to exhibit a high level of resilience, coordination and camaraderie to collectively tackle this situation in the best interest of the people of Sikkim. 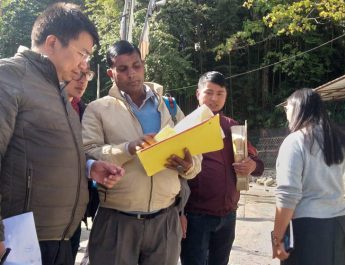