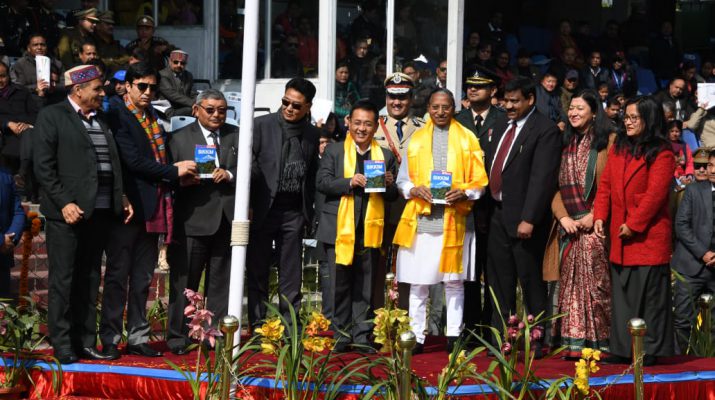 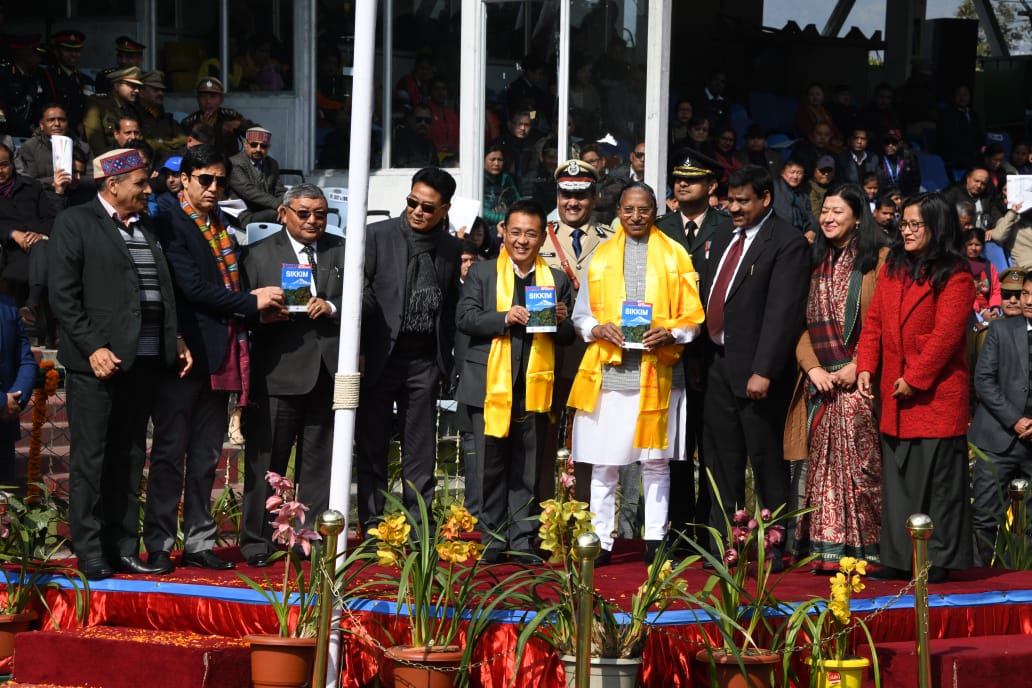 Gangtok, January 26: (IPR) Sikkim joined the rest of the nation in celebrating the 71st Republic Day of India with patriotic fervour and enthusiasm. In the state level function organised at Paljor Stadium here in the State capital, the Governor of Sikkim, Shri. Ganga Prasad unfurled the national flag, and received the National salute. The Governor then reviewed the Republic Day parade put out by the smartly turned out personnel from ITBP, SSB, SAP, 2nd and 3rd IRBn, Sikkim Police (Male and Female Platoons), Sikkim Home Guards, NCC, Army Band, and Sikkim Police Pipe and Brass Bands. This was followed by an impressive march past by the contingents. Shri J. Jaya Pandiyan, IPS, SDPO Namchi led the contingents as the parade commander, and he was supported by Parade 2 I/C, Police Inspector Pema Rana, SHO Chungthang.

The Governor in his address, reminisced the efforts of freedom fighters who fought for the independence of India and said that India has come a long way since the adoption of the Constitution on January 26th, 1950.

Development and growth of Health sector, Women’s Rights in the State of Sikkim was the highlight of the Governor’s address at the 71st Republic Day celebrations. Further, he talked about the benefits provided by the Government to employees such as Health Insurance policies and also touched upon the prodigal work done by the State in terms of Education, Women’s Empowerment, Rural and Urban Management, Tourism, towards making efficient citizens who contribute for betterment of Sikkim and India.

The Governor enlightened everyone about the vision of State Government to solve issues such as road congestion, and continuous supply of electricity and water. He talked about transforming ourselves into responsible citizens towards our duty, our community and the State. He further said that the State Government despite of all its achievements should not rest on its laurels and must make bold steps to ensure sustainable development of our future generation. In the end, the Governor concluded by congratulating the Police medal winners and State awardees for bringing laurels to the State.

Customary to the Republic Day Celebrations in the State of Sikkim, Police Personnel from the state were feted with the decorated Presidents Police Medal and exemplary employees of the Government of Sikkim were awarded the Sikkim State Meritorious Service Award in recognition of their admirable and dedicated services to the State.

It was announced that Smt. Tshering Yangzom, Deputy Superintendent of Police, Home Guards & Civil Defense was awarded the Police Medals on the eve of Republic Day, 2020, for her outstanding service.

The President’s Police Medal for 2018 was awarded to Miss. Eden Subba, SPS, Additional Superintendent of Police for her selfless service towards the State.

The following Government employees were honored with the Sikkim State Meritorious Service Awards on the occasion:

Shri Pemba Tshering Sherpa who won Bronze medal in weight-lifting at Khelo India Games 2020, and Shri Ladorjee Tamang who won 1st position in Guitar Solo at 23rd National Youth Festival recently in Lucknow were also presented with appreciation awards for their accomplishment and for bringing laurels to the State.

Amidst loud cheers of encouragement, the Governor presented trophies to contingents based on their performance in the Republic Day parade. The Sikkim Police Female Platoon took the ‘All Round Best Platoon Award’ followed by Indo-Tibetan Border Police which won the ‘Second Best Platoon Award’. The ‘Best Band Contingent Award’ was presented to Army Band while NCC walked away with the ‘Consolation Prize’. The selections were made by a jury constituted for the purpose.

2. Sikkim’s MSME Story (The journey of growing state and its enterprise) – by the Commerce & Industries Department

The Governor, Chief Minister, Cabinet Ministers, MP Lok Sabha, MLAs, and other dignitaries visited the army equipment display on one side of the ground, where they were extensively briefed about the various equipment and paraphrenia on display, by top officials of the army.

The programme also had colorful cultural presentations by the students of Kendriya Vidyalaya Gangtok, who performed an Integration Dance, while artists of the Culture Department presented a folk dance depicting the tradition of Sikkim. One of the highlights of the day was the Girls Self Defense Demonstration under the Beti Bachao Beti Padao programme. An initiative of the Sports & Youth Affairs Department, Government of Sikkim, this programme is being taken to every school in the state to empower the girl child.

Earlier, the showering of flower petals by the Helicopter (organized by Tourism & Civil Aviation Department) added more color to the day’s proceedings.

The state level programme concluded with the tune of the National Anthem performed by Sikkim Police Brass Band. 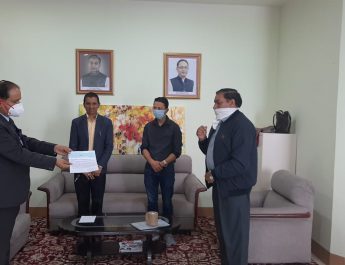 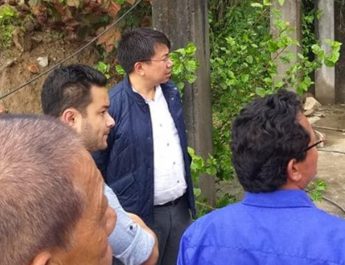 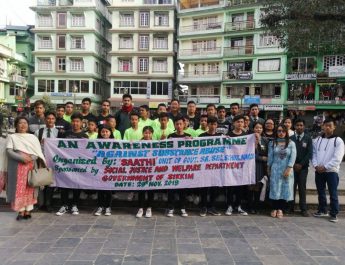