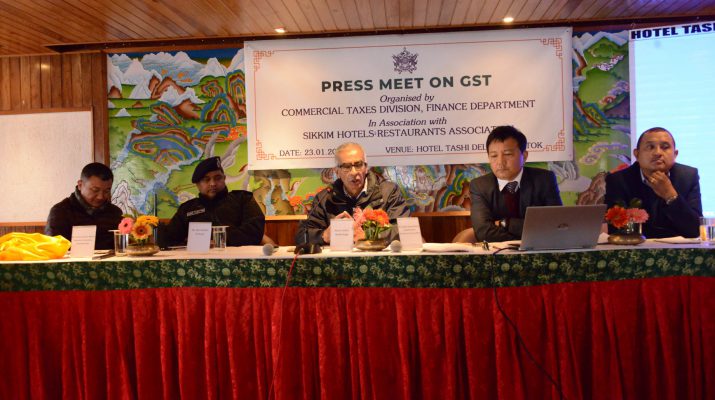 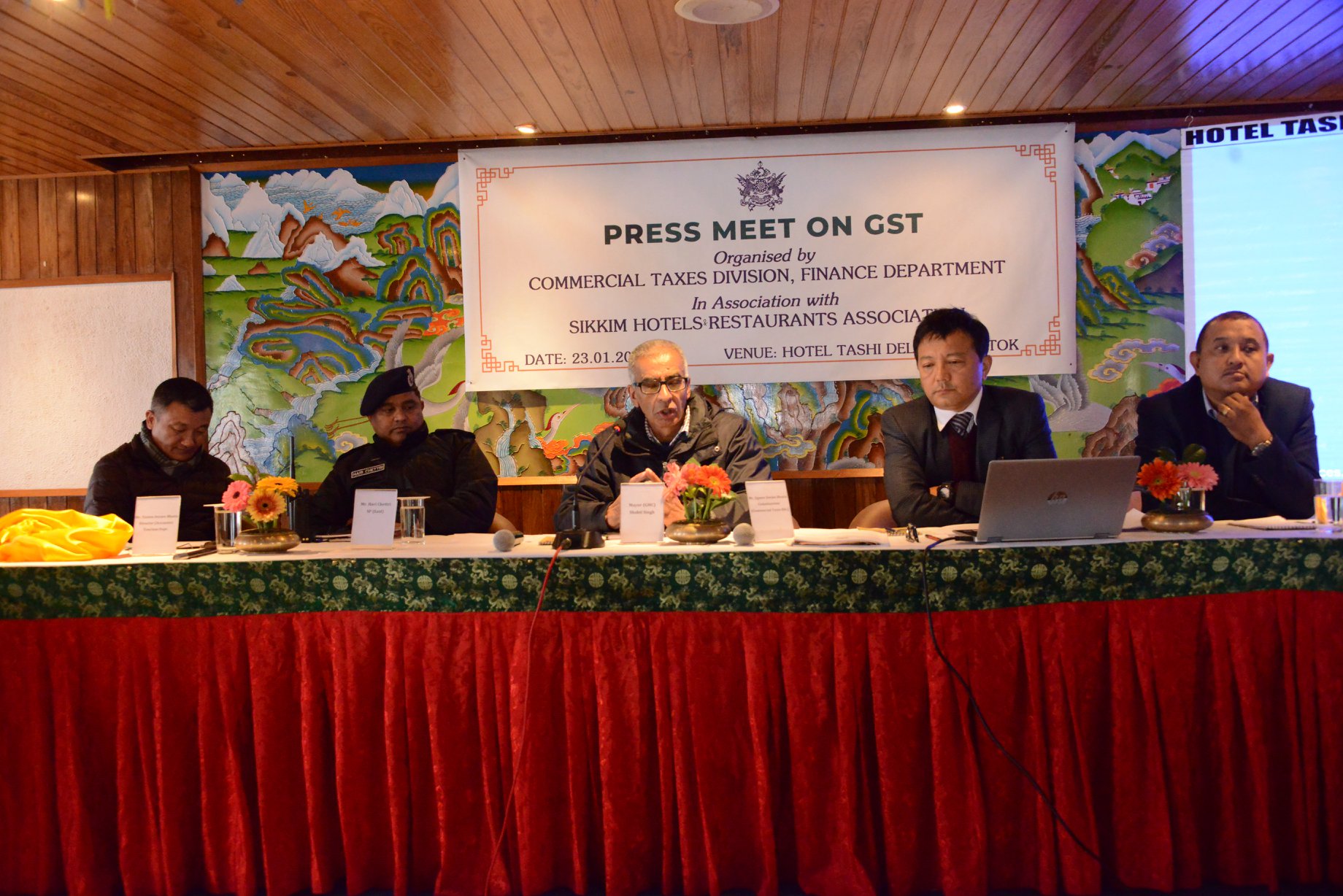 Gangtok, January 23: (IPR) The Commercial Taxes Division, Finance Department in association with Sikkim Hotels & Restaurants Association (SHRA) has decided to organize an awareness drive on GST (Goods and Services Tax) followed by an enforcement drive to ensure timely payment of GST and other taxes. The enforcement drive will commence from 17th February, 2020. A press conference in this regard was organized today by the Commercial Taxes Division of the Finance Department, here in the capital.
The press conference was jointly addressed by Mayor (GMC) Shri Shakti Singh Choudhary, Commissioner (Commercial Taxes Division) Shri Jigmee Dorjee Bhutia, Director (Accounts) Tourism Department, Shri Tseten Dorjee Bhutia, Superintendent of Police (East) Shri Hari Chettri, and President (SHRA) Shri Roshan Pradhan.
It was informed that GST is a destination based tax system, and this feature of GST has generated more revenue for consumer states like Sikkim and other states of North – East.
The overall collection of Commercial Taxes Division during April-December 2019 has grown by 21.28 % in comparison to collection of April-December 2018. Further, GST collection during April to December 2019 has grown by 17.32 % in comparison to collection of April to December 2018; Per capita collection of GST from April to December 2019 in Sikkim is Rs 3.505.00 which is highest among all the states of India. Second position is held by Goa with per capita collection of 2.488. 00 and Delhi is third with 2.203.00.
Nevertheless, in sector wise analysis of revenue collection it is found that the collection of GST from Hotel sector remains below par compared to other sectors of the State Economy. Department conducted a field survey of the hotels and found that the number of defaulters is very high and the majority of the defaulters are ignorant about the consequential law. It is essential to make stakeholders aware about the legal provision before taking coercive action. Hence, the Commercial Taxes Division arranged to publish notices in local newspapers urging the hoteliers to obtain registration, pay GST in time and file returns regularly.
It was also informed that this Joint Press Conference is specially held to inform hoteliers that the Commercial Taxes Division will launch enforcement action from 17 February 2020 against the defaulting hoteliers. It may even include the arrest of the defaulters under Section 69 of the Sikkim Goods & Services Tax Act, 2017. So all hoteliers should make sure their GST payment is up to date before 17 February, 2020. It has been noted that most of the property owners and license holders have leased out their business to a third party. In such cases, it is the duty of the Lessor (the property owner or licensee) to register himself/herself as a taxpayer providing leasing service. He/she should collect GST on the lease amount and deposit the GST to the Government.
When the Lessor is registered, it will automatically compel the lessee also to obtain registration as taxpayer providing service of supply of food and accommodation services. The lessee can take credit of the tax paid on lease amount, so there is not extra tax burden on him.
It was further informed that in the current scenario, the lessor is neither taking registration nor paying tax on the lease amount. This is opening back door route to the Lesse to evade tax. It may be true that the lease deed is a mere bunch of paper and can be shielded, but the ongoing hotel business is hidden neither in the physical market nor in the Internet market. If the Lesse does not take the registration for the hotel business, then by default the person holding the license issued by UDHD or Municipality ‘or the BDO office to run the hotel will be responsible to pay the GST for the business turnover. Usually the license holders are property owners themselves or their nominees. It should also be noted that the Commercial Taxes Division is part of the Common Forum constituting Income Tax Department, Private Banks and Public Banks. The forum regularly shares all information about financial transactions.
In today’s state of information technology advancement it is not possible to remain hidden from the eye for a very long time. Any kind of tax, interest, and penalty can be recovered through various measures empowered in the GST Act including Auction of properties, it was stressed upon in the press conference. 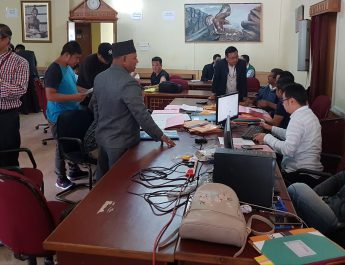 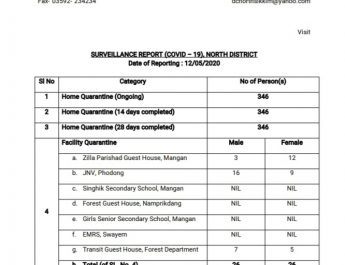