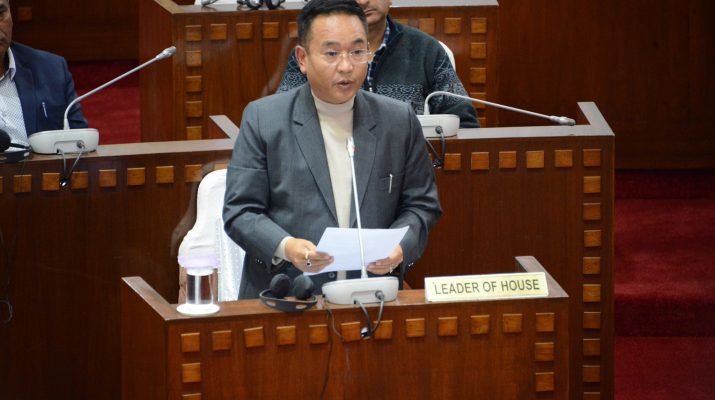 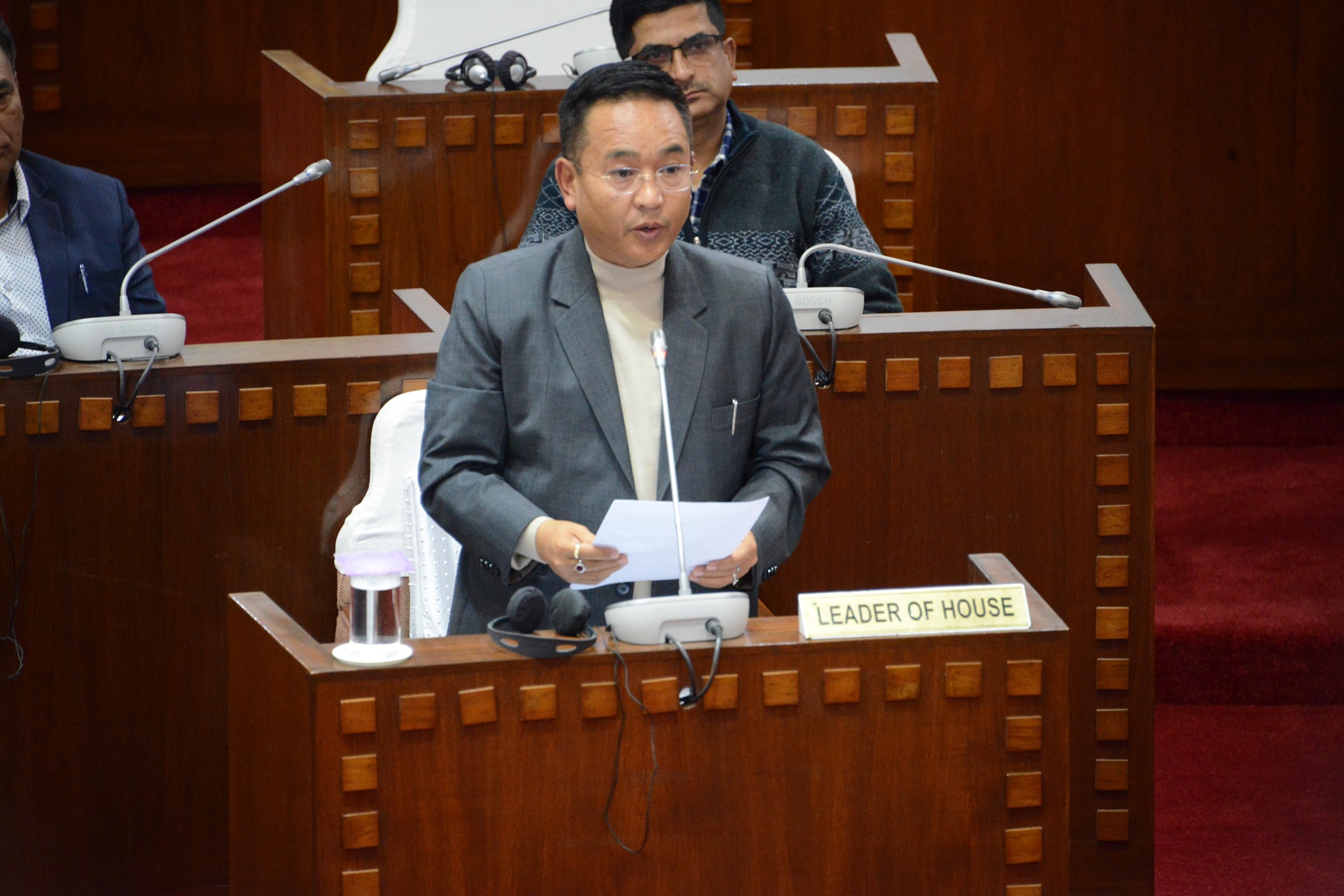 Gangtok, Nov 28 (IPR): The First Session (Part-IV) of the Tenth Assembly of Sikkim Legislative Assembly commenced today.
The session began with Hon’ble Speaker Shri. L.B. Das administering the Preamble Pledge to the Hon’ble Members to commemorate the 70th Anniversary of the Adoption of the Constitution of India. The Hon’ble Speaker apprised the House that a four-month long nation-wide campaign was launched on the 26th of November, 2019, which will culminate on the Birth Anniversary of Dr. B.R. Ambedkar on 14th April, 2020.

The House then paid tribute to Former Members of Legislative Assembly Late Shri. Indra Bahadur Rai, who passed away in the month of October, 2019, and Late Shri. Tara Man Rai, who passed away in August, 2019.
Hon’ble Speaker Shri L.B. Das in his Obituary Reference remembered Late Shri Inda Bahadur Rai as a veteran politician and a statesman, and stated that with his passing away, Sikkim has lost a worthy son. In his obituary reference, Hon’ble Speaker shared about the early life, education, professional career and political life of the former Members of the Legislative Assembly.

Hon’ble Speaker remembered Late T.M. Rai as a mature politician, a seasoned litterateur and an accomplished social worker who dedicated his life for the welfare of the people. The Hon’ble Speaker stated that the passing away of the veteran leader is a huge loss for the State and the people of Sikkim. He expressed his heartfelt condolences to the bereaved family and prayed that they found strength and forbearance to overcome the grave loss.

The Obituary Reference was also participated by Hon’ble MLA Shri D.T. Lepcha, who gave references of the lives of both the leaders.

Late Indra Bhadur Rai, former Member of Sikkim Legislative Assembly breathed his last on the 31st of October 2019 at Central Referral Hospital, Tadong, Gangtok at the age of 69 years.
Late I.B. Rai was born on 14th June, 1950 to Late Laxuman Rai and Late Bibasori Rai at Pabyuk-Naitam village. He is survived by his wife Debya Rai, three daughters and a son.
Late I.B. Rai started his early education from a committee school started by his father in Naitam-Pabyuk village in 1959. Pabyuk Senior Secondary School which still exists today was first started by his father and was taken over by the Government with the support of Shri B.B.Gurung who was EC during the time of the Chogyal’s regime. After completing his 5th grade from this school in 1963 he was enrolled in Tashi Namgyal Academy, he then studied in Tashi Namgyal Higher Secondary School now TNSSS from 7th standard till the completion of standard 11 in 1970. Then, he completed a Bachelor’s Degree in Arts from North Point College, Darjeeling in 1975. During his college days, he was involved with the National Service Scheme Unit of the college through which he attended social service camps to cater to refugees during the Liberation war of 1971.
After graduation, he established a Consumer Co-operative in Gangtok in 1975 which give him an opportunity to complete his Diploma in Cooperative Management in Moscow, USSR in 1976-77.
Late Indra Bahadur Rai was deeply interested in politics since his heydays in College and actively joined politics since 1975. He was a part of the Youth Congress in 1975 before shifting loyalty to the Sikkim Prajatantra Congress Party and contested two elections in the General election of 1979 and the Parliamentary election of 1980.
He subsequently joined the Sikkim Sangram Parishad under the leadership of Late Nar Bahadur Bhandari and thereafter in the 1985 election to the Third Sikkim Legislative Assembly, he became a Member of the Sikkim Legislative Assembly from Temi-Tarku Assembly Constituency. He was again re-elected for a second tenure to the Fourth Sikkim Legislative Assembly in 1989.
During his tenure as Legislator, he served as Chairman of Estimate Committee, Chairman SIMFED, Chairman Power Development Corporation, Chairman Electricity Advisory Board.

Late I. B Rai’s ability to connect to the masses, his humility and simplicity shall forever inspire generations to come.
With the sad demise of late Shri Indra Bahadur Rai, Sikkim has lost a statesman and a worthy son of the soil. It is an irreparable loss to the people of Sikkim.

Late Shri Tara Man Rai, former Member of Sikkim Legislative Assembly breathed his last on the 5th of August, 2019 after a prolonged illness at his residence in Marchak, East Sikkim and had attended the age of 69 years.
Late Tara Man Rai was born on the 1st of September, 1950 to Late Hangjit Rai and Late Juranphul Rai at Zoom village, West Sikkim. He is survived by his wife Nirmala Rai and a son.
Late T. M. Rai completed his early education up till Seventh standard from Chakung, Government School (1960-67) thereafter he did his high schooling from Namchi Government School. Late T. M. Rai then served as a teacher in committee schools at Gelling and Zoom West Sikkim and joined Government Service as a teacher at Yuksam Government Primary School, Reshi Government School, etc. prior to his resignation from the regular service of teaching.
Late T. M Rai had always had a mature perspective of political evolution from an early age and in 1984 he resigned as a teacher and involved in active politics. He was a member of the Himali Congress which then merged with the Sikkim Sangram Parisad in 1984. In 1985 he contested on the SSP ticket from Chakung Assembly Constituency and upon victory, he became a Legislator to the Third Sikkim Legislative Assembly. When the SSP party came to power upon obtaining a majority, he was then inducted as a Cabinet Minister taking charge of Agriculture and Co-operative Society, Government of Sikkim.

Late Tara Man Rai worked for hand in hand with the aspirations of the people strived for the development of his Chakung constituency and after five years in 1989, he was again set up as the SSP party candidate from Chakung constituency in the general election which thereafter brought him again back to the Sikkim Legislative Assembly as an MLA for the 2nd consecutive time in the Fourth Sikkim Vidhan Sabha. This time he was entrusted with the post of Chairman Estimates Committee, Chairman Public Accounts Committee, and Chairman Sikkim Consumer Co-operative Society.
Late T. M. Rai travelled for conferences throughout India. He attended Commonwealth meets on Agriculture in Australia and attended conferences in Thailand, Honk-kong, and Singapore.
Having an interest in Nepali literature, Late T.M.Rai wrote stories which were published in Nepali Magazine “Kanchenjunga Patrika”
Late Tara Man Rai was dedicatedly associated with the Sikkim Krantikari Morcha which came to power in 2019 and until his demise he was the Party’s Chief Advisor.
With the sad demise of Late Tara Man Rai, the State of Sikkim has lost an eminent leader, prolific thinker, accomplished social worker and a stalwart whose life was devoted to the welfare of the poor and marginalized. He shall forever remain as an inspiration to the people of Sikkim.

After the Obituary References, the House observed two minutes silence as a mark of respect to the departed souls.

The Hon’ble Speaker also read out a direction regarding maintenance of order in the Sikkim Legislative Assembly Secretariat Estate. 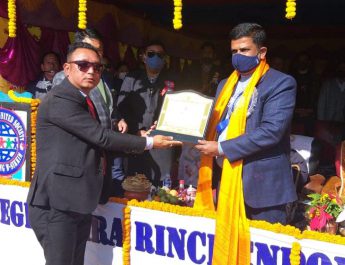 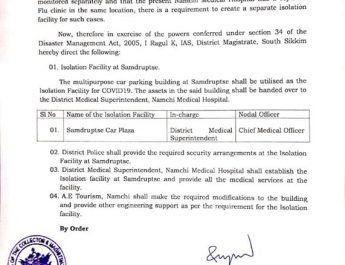 Official order from the office of DC South