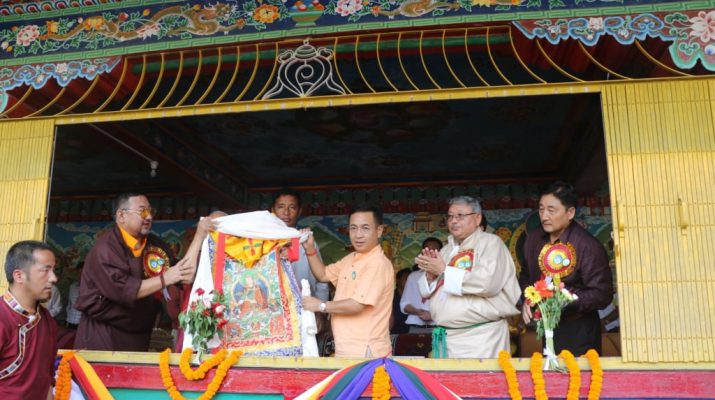 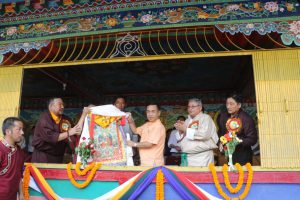 Mangan, 06 Sept (IPR): Hon’ble Chief Minister, Shri Prem Singh Tamang (Golay), along with SLA Speaker, Lok Sabha MP, Cabinet Ministers, Secretaries and Advisors were felicitated by the Save Longtsok Association (SLA) on Friday for the glorious victory of Sikkim Krantikari Morcha in the General Election 2019 and for the formation of a new government.

The felicitation programme being organized by SLA was held at Goenchen Phenzang Sangha Choding Monastery (Phenzang Monastery) in North Sikkim.

On the occasion, the HCM also inaugurated Buddhist Circuit Building at the premises of Phenzang Monastery. Thereafter, he offered prayers at the main shrine-hall of the monastery.

Addressing the gathering, the HCM extended his warm congratulations to the members of SLA, Lamas and public on getting a new Buddhist circuit house at Phensong which will house the growing number of monks in the region.

He appreciated the efforts of SLA members who struggled to preserve historical shrine located at Kabi-Lungchok which is important not just to Bhutia and Lepcha people but is of historical importance to the people of Sikkim. He congratulated the SLA, Lamas and Bhutia-Lepcha community on successfully saving historical shrine.

He spoke on removal flags of political parties during religious, community and cultural programmes. Speaking on this context, he said that from now on, no community or association will misuse political flags which cause division in the society. Furthermore, he said that his Government works to unite all the communities under one roof.

The HCM assured that his Government will fulfill all the demands placed by the public and the SLA in the near future. Responding to the demands placed by the public and SLA, he opined that North Sikkim will become a tourist hub which will generate maximum revenue for the locals. He also announced that Kabi Senior Secondary School will get Science stream by following year.

Area-cum-Minister for Forest and Environment Management, Shri Karma Loday Bhutia, in his short speech stated that the government shall leave no stone unturned to fulfill the expectation and aspiration of the people of the state.

Speaking on education sector, Shri Bhutia spoke about the lack of Post Graduate Teachers in Bhutia and Lepcha language in the district. He informed that his Government is working hard to solve this problem by bringing in PGT teachers from other parts of the district to the North.

Ecclesiastical Minister, Shri Sonam Lama, spoke about struggles faced by Bhutia-Lepcha community and Lamas to save historical worship shrines of Kabi-Lungchok. He thanked the high ranking bureaucrats who helped him during hard times. He assured the public that all the demands placed by the public is closely being observed by the Government and they will get fulfilled.

Later in the evening, the HCM also met with the public of Phenzang and proximity at new Buddhist circuit house wherein he listened to the grievances and demands of the public. 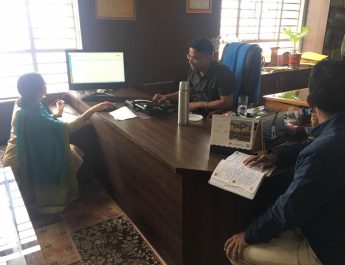 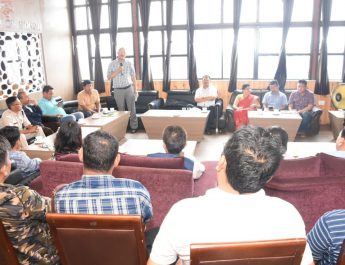 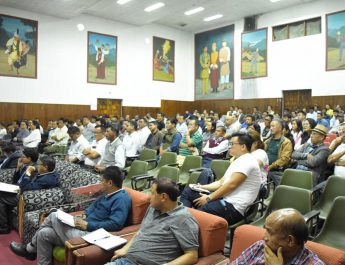